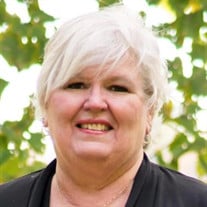 Donna Swanson, age 67, of Marshall, Minnesota, died on Friday, February 4, 2022, at the Avera Morningside Heights Care Center in Marshall. Funeral Services will be held at 11:00 a.m. on Friday, February 11, 2022, at First Lutheran Church in Marshall, Minnesota. Following a reception, interment will be in the Russell Cemetery. Visitation will be held from 4:00 – 8:00 p.m. on Thursday, February 10, 2022, at the Hamilton Funeral Home in Marshall. A prayer service is scheduled for 7:00 p.m. Visitation will then continue one hour prior to the service on Friday, from 10:00 a.m. until the time of services at 11:00 a.m., at the church. LaDonna Marie Goslar was born on January 26, 1955, in Appleton, Minnesota. She was the daughter of Donald Sr. and Shirley (Arndt) Goslar. Donna was baptized as an infant and started school in Marshall. She was confirmed at First Lutheran Church in Marshall. The family later moved to the Lynd and she graduated from the Lynd High School with the class of 1973, which happened to include Mr. Larry Swanson. On April 6, 1974, Donna was united in marriage to Larry at First Lutheran Church in Marshall. Shortly thereafter, the couple moved into their life-long home on an acreage just outside of town. In their first years of marriage, Donna and Larry enjoyed riding around in their Trans Am and worked hard building the family farm together. The couple was blessed with three sons: Travis, Jesse, and Chad. Donna began her 25-year long employment with the Super 8 Motel in Marshall. She also put her love of children to use as she did daycare for several years. Donna recently began enjoying retirement about 5 years ago. Donna was devoted to her family; her 6 grandchildren were the center of her world. She never missed a chance to be involved with their activities, and enjoyed attending sporting events, volunteering at the school, and traveling with the sports teams. She was a longtime member of First Lutheran Church and showed her love by helping others in any way she could. Donna took her enthusiasm of crafting and co-founded Crafty Creators in the mid-1970s, which is still meeting to this day. She also had a love for the outdoors and appreciated God’s creations, particularly through bird watching. LaDonna Swanson died on Friday, February 4, 2022, at the Avera Morningside Heights Care Center in Marshall. She had reached the age of 67 years and 9 days. Blessed be her memory. Donna is survived by her husband, Larry Swanson of Marshall; 3 sons, Travis (and Mary) Swanson of Marshall, Jesse (and Jennifer) Swanson of Johns Island, SC, Chad (and Heidi) Swanson of Marshall; 6 beloved grandchildren, Payton Swanson, Brock Swanson, Kalli Swanson, Rocco Swanson, Austin Swanson, Charlie Swanson; 2 brothers, Don (and Jean) Goslar of Marshall, Lee Goslar of Vancouver, WA; nieces, nephews, other relatives, and friends. Donna was preceded in death by her parents, Don and Shirley Goslar, and brother, Jim Goslar.

The family of Donna Marie Swanson created this Life Tributes page to make it easy to share your memories.