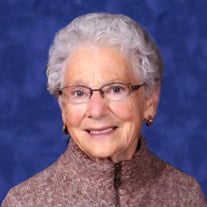 Dora Schultz, age 87, of Marshall, Minnesota, died on Friday, November 8, 2019, at the Avera Morningside Heights Care Center in Marshall. Funeral Services will be 11:00 a.m. Tuesday, November 12, 2019, at Christ Evangelical Lutheran Church in Marshall, Minnesota. Interment will follow in the Marshall Cemetery. Visitation will be held from 4:00 – 7:00 p.m. Monday, November 11, 2019, at the Hamilton Funeral Home in Marshall. A prayer service is scheduled to begin at 7:00 p.m. Visitation will then continue one hour prior to the service, from 10:00 – 11:00 a.m., on Tuesday at the church. Dora June Willard was born on March 11, 1932, to Porter and Leona (Smiley) Willard, in Tracy, Minnesota. She attended school in Marshall, graduating with the high school class of 1950. Dora was later baptized and confirmed as an adult at Christ Evangelical Lutheran Church in Marshall. On May 20, 1951, Dora was united in marriage to Donald Schultz in Marshall. They made their home in Lynd and then South of Marshall on the family farm. Dora was a loving wife, homemaker, and mother to their 6 children. Dora was a proud member of Christ Evangelical Lutheran Church in Marshall, where she helped with altar care and communion care, taught Sunday School, was a leader for the Girl Pioneers, and was active in Missions. She enjoyed the ladies’ Neighborhood Card Club meetings. Her other enjoyments in life included reading, embroidery, watching Wheel of Fortune, cooking, and spending time with her family – especially babysitting her grandchildren. She loved to teach the next generation how to make doughnuts from scratch and was very proud of her large family and the festive get-togethers for the holidays. Dora Schultz entered her Heavenly home on November 8, 2019. She reached the age of 87 years, 7 months, and 28 days. Blessed be her memory. She is survived by her husband of 68 years, Donald Schultz of Marshall; 6 children, Marlys (and Wayne) Skaar of Minneota, Marlin (and Jody) Schultz of Morgan, Wally Schultz of Tracy, Wendy (and Gary) St. Aubin of Marshall, Laurie (and Bruce) McVey of Marshall, Lonny (and Kathy) Schultz of Marshall; 21 grandchildren, Oona (and Jared) Olson, Lisa (and Jon) Fadness, Wade Skaar, Christian Schultz, Brita (and Kyle) Lage, Lindsay Schultz, Nathan Schultz, Kelly Schultz, Cole Schultz, Tasha Schultz, MacKenzie (and Jade) Swank, Brandi (and Chris) Lahn, Melissa (and Chad) Nissen, Courtney (and Ben) Blomme, Thane Hemish, Andy Hemish, Trevor Hemish, Adam McVey, Trisha (and Jordan) Phillips, Derek Schultz, Brock Schultz; 16 great-grandchildren; brother, Dale (and Angie) Willard of Tracy; nieces, nephews, other relatives and many friends. Dora was preceded in death by her parents, Porter and Leona Willard, and infant brother, Francis Willard.

The family of Dora June Schultz created this Life Tributes page to make it easy to share your memories.

Send flowers to the Schultz family.