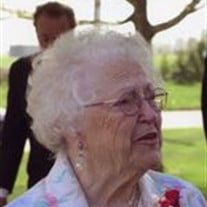 NOTE: PRAYER SERVICE HAS BEEN CANCELED DUE TO THE WEATHER... FAMILY WILL BE PRESENT AT THE FUNERAL HOME UNTIL 6 PM MONDAY EVENING. Doreen VanOverbeke, age 92, of Marshall, passed away peacefully with family at her side at the Minneota Manor on Thursday, January 8, 2009. Mass of Christian Burial is will be 10:30 AM on Tuesday, January 13, 2009 at St. Clotilde Catholic Church in Green Valley. Burial will be in the church cemetery. Visitation will be 4:00 P.M. to 8:00 P.M. with a 4:00 P.M. CCW Rosary and a 7:00 P.M. prayer service Monday at the Hamilton Funeral Home. Visitation will continue at the church on Tuesday, one hour prior to the service. Condolences can be submitted at www.hamiltonfh.com. Doreen Gertrude Devereaux was born to Dennis and Alma (LaMarre) Devereaux on December 23, 1916 in Kenkokee, Illinois. She was baptized in Illinois, and she received first communion and was confirmed at St. Clotilde Catholic Church in Green Valley, and was a lifetime member of the St. Clotilde Parish. She completed elementary school while living in rural Green Valley. On January 5, 1938, Doreen was united in marriage to Oscar VanOverbeke in Green Valley. After their marriage, Doreen was a homemaker and housewife while they lived in Green Valley, Cottonwood, and Marshall. Doreen’s enjoyments in life included participating in church activities, her strong faith, traveling, family events, embroidery and quilting, making homemade breads and buns, birds, four-leaf clovers, gardening, singing old songs, chickens, and selling eggs. Her most precious treasure was time with her family and friends. Doreen passed away at the Minneota Manor Care Center on Thursday, January 8, 2009. She had reached the age of 92 years and 16 days. She is survived by children, Shirley Paradis of Marshall, Carol (and Jerry) Monsrud of Marshall, Elaine (and Paul) Swift of Oaxaca, Mexico, and Tammy VanOverbeke of Marshall; grandchildren, Gary (and Susan) Paradis, Tim Paradis, Lisa (and Jerry) Fischer, Craig Paradis, Jim (and Lori) Monsrud, Jeff Monsrud, Teresa (and Curt) Buysse, Elisabeth Swift, Matthew Swift, and Hannah Swift; twelve great-grandchildren; two great-great grandchildren; sister, Darlene VanOverbeke of Marshall; and many other relatives and friends. She was preceded in death by her parents; husband, Oscar; brother, Jerome; sisters, Dorothy McLaughlin and, Doris Mae VanOverbeke; and son-in-law, Bruce Paradis. Doreen VanOverbeke was always loved and will be greatly missed.

NOTE: PRAYER SERVICE HAS BEEN CANCELED DUE TO THE WEATHER... FAMILY WILL BE PRESENT AT THE FUNERAL HOME UNTIL 6 PM MONDAY EVENING. Doreen VanOverbeke, age 92, of Marshall, passed away peacefully with family at her side at the Minneota... View Obituary & Service Information

The family of Doreen Gertrude VanOverbeke created this Life Tributes page to make it easy to share your memories.

NOTE: PRAYER SERVICE HAS BEEN CANCELED DUE TO THE WEATHER......

Send flowers to the VanOverbeke family.