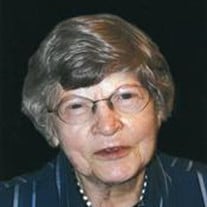 Marshall: Doris I. (Fousek) Ashling age 84 of Marshall formerly of the Boyd area, passed away at the Avera Morningside Heights Care Center in Marshall on Sunday, September 16, 2012. Funeral services will be 11:00 A.M. Friday, September 21st at Christ United Presbyterian Church in Marshall. Visitation will be 5:00 P.M. to 7:30 P.M. with a 7:00 P.M. prayer service Thursday at the Hamilton Funeral Home. Visitation will continue at the church on Friday, one hour prior to the service. Doris Ileane was born at home, in rural Clarkfield to Rudoph and Ida (Lynne) Fousek along with her twin sister Dorothy Mae on December 3, 1927). Her early childhood was spent on a farm near Clarkfield and later in the small town of Boyd, Minnesota. She was baptized at Bergen Lutheran Church in rural Clarkfield and confirmed at Trinity Lutheran Church in Boyd. She graduated from Boyd High School. On July 30, 1950 Doris was united in marriage to Fredric Ashling. The couple lived in Dawson for three years before moving to Colorado Springs where the family resided the next 6 years. The family returned to Minnesota in 1959 and lived in rural Marshall. After Fredric died suddenly in 1970, Doris moved into her home in Marshall and lived there for the remainder of her adult life. Doris’s life centered around her family. She raised 7 children and took great pride in their accomplishments. Although her children seldom did anything truly worrisome she steadily clipped articles from newspapers and magazines providing each of them with warnings of various dangers or offering advice and suggestions in hopes of making their lives a little bit better. She could worry with the best of them and always wanted to be reassured with a phone call so that she knew her children made it to their destinations safely. She enjoyed visiting her siblings and their families and keeping in touch by phone and letter. Doris enjoyed gardening, canning, baking, sewing, and ceramics. She purchased her own kiln and gave ceramic lessons in her home. Doris opened up her home as an adult foster home for Lyon County residents in need of a supportive home environment. She also worked as a cook at Children's Center Childcare and as a Community Care worker for a local social service agency. Doris enjoyed seeing the country and taking trips with her family. Camping trips to Minnesota state parks were the usual destination for the annual family vacation when the children were younger. Road trips to destinations such as Arkansas, New York, Montreal, Niagara Falls, Washington DC, Colorado, and the Black Hills were made when the children were older. She was an active member of Christ United Presbyterian Church of Marshall and helped host many church events over the years. Doris was a member of a neighborhood card club which continued to meet regularly even after its members had moved from the old neighborhood. She never claimed to be much of a card player but clearly enjoyed the social opportunities afforded by the group’s gatherings. Doris is survived by loving children David Ashling (Mary Ellen) of Golden Valley; Patricia Ashling, of Mankato; Becky Ashling (Les Weeks ) of Maplewood , Bonita VanMoorlehem (Roger) of Minneota , Candace Seeber (Jeff)of Woodbury, Melissa Enter (Terry) of Mankato and Michael Ashling (Mike) of Golden Valley; grandchildren Jared (Rich), Caleb, Amy, and Douglas Ashling, Cassie Weeks, Jon and Sara (fiancé Kurt) VanMoorlehem , Travis, Tanner, Mariah, and Trenton Enter; great grandchild Carina Rain Vang; brother Robert Fousek of Hackensack; sisters Marcella (Harold) Sumner of rural Boyd; Claire Ashling; Ina (Lawrence) Olson of Dawson, Gloria (Richard) Saue of Montevideo, and Judy (Stan) Antolick of Montevideo; and nieces and nephews and other family members and friends. Doris was preceded in death by her parents; husband, Fredric Ashling;, twin sister, Dorothy; and grandson Riley Enter. Blessed be the memory of Doris Ashling

The family of Doris Ileane Ashling created this Life Tributes page to make it easy to share your memories.

Send flowers to the Ashling family.