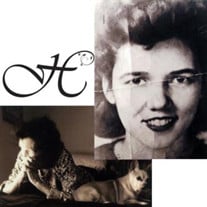 Doris Magoon, age 92, of Marshall, Minnesota, formerly of the Vermont/New Hampshire area, died on Tuesday, July 13, 2021, at the Avera Granite Falls Health Center in Granite Falls, Minnesota. A graveside service will be held in August at the Oak Hill Cemetery in Bellows Falls, Vermont. Doris June Fletcher was born on September 9, 1928, in Dummerston, Vermont. She was the daughter of Charles Edward and Beatrice Irabelle (Pratt) Fletcher. Doris attended Brattleboro area schools. In her youth, Doris’s favorite hobbies were dressing up and dancing. While she liked all kinds of dancing styles, her favorites were the Jitterbug and Twist. Doris ended up winning a trophy at one of these dancing competitions. It was at one of these dances, Doris met Bernard Harry Magoon, and, in October of 1949, Doris and Bernard were united in marriage. Doris and Bernard had 4 children together: Dennis, Randy, Tami, and Shawn. The family then settled down in Connecticut. Family was the most important part of Doris’s life. As stubborn as she was, Doris’s caretaking tendencies became apparent when it came to her children, grandchildren, and great-grandchildren She often enjoyed sharing her love by baking cookies and cakes, and trying out different ethnic recipes. One of Tami’s favorite dishes Doris made was the Stuffed Cabbage. Her other enjoyments in life included knitting and animals. While Doris spent most of her life on the East Coast, in 2018, her daughter brought her to Marshall to live with her. While the change was hard on both Doris and Tami, they thrived together and created a lot of lasting memories. Doris June Magoon died on Tuesday, July 13, at the Avera Granite Falls Health Center. She reached the age of 92 years, 10 months, and 2 days. Blessed be her memory. Doris is survived by her three children, Randy (Cindi) Sides-Magoon of Old Lyme, CT, Tami Doucette of Marshall, Shawn Magoon of Lyeden, MA; 11 grandchildren; numerous great-grandchildren; her beloved four-legged companion, Dogge; many nephews, nieces, other relatives and friends. Doris is preceded in death by her parents, Charles and Beatrice Fletcher; husband, Bernard Magoon; son, Dennis Magoon; 3 sisters; and 1 brother.

Doris Magoon, age 92, of Marshall, Minnesota, formerly of the Vermont/New Hampshire area, died on Tuesday, July 13, 2021, at the Avera Granite Falls Health Center in Granite Falls, Minnesota. A graveside service will be held in August at the... View Obituary & Service Information

The family of Doris June Magoon created this Life Tributes page to make it easy to share your memories.

Doris Magoon, age 92, of Marshall, Minnesota, formerly of the...

Send flowers to the Magoon family.