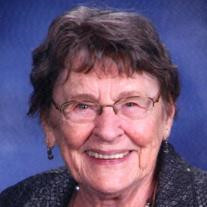 Doris Petrich, age 93, of Marshall, formerly of Worthington, Minnesota, passed away on Tuesday, November 13, 2018, at Patricia Court Assisted Living in Marshall. Funeral Services are 11:00 a.m. Friday, November 16, 2018, at Good Shepherd Lutheran Church in Marshall. Interment will follow in the Marshall Cemetery. Visitation will be held from 5:00 – 8:00 p.m. Thursday, November 15, 2018, at the Hamilton Funeral Home in Marshall. A prayer service is scheduled for 7:00 p.m. Visitation will continue one hour prior to the service, from 10:00 – 11:00 a.m. on Friday at the church. Doris Mae Sprink was born on May 18, 1925, to Rudolph Paul and Adina (Schlekau) Sprink in Lake Benton, Minnesota. She was baptized as an infant in Lake Benton before the family moved to Worthington. She was confirmed there in 1940 at St. Matthew Lutheran Church. Doris attended school in Worthington, graduating with the high school class of 1943. Soon after she was married to W. D. Thomas and they had a daughter, Kathie. Then on December 26, 1954, Doris was united in marriage to Duane Petrich at St. Matthews Lutheran Church. The couple spent over 52 years of marriage together and Doris had 6 more children. She worked at the State Bank and then as assistant manager at the Telephone Company’s business office in Worthington for about 12 years. As her family grew, she stayed at home; the ultimate mother, homemaker, and farm wife. She and Duane started their family in Worthington before moving to farm outside Bigelow. In 1965, they moved to farm outside Marshall, in Fairview Township, until retirement in 1991. The family then moved into Marshall and Duane died in 2006. When Doris needed more assistance with her care, she moved to the Patricia Court Assisted Living in 2013. Doris and her family were one of the initial members to join Good Shepherd Lutheran Church in Marshall and she was active in the choir and congregation. She was a stable and supportive mother whose faith served as her family’s bedrock. She loved her Bible, was convicted and passionate in her views, was always there to selflessly support others, and had a heart to serve those in need. Doris’ enjoyments in life included doing puzzles and playing cards with her family. She promoted education for her children and installed a valuable work ethic in them; simply put: after God and family, church and chores came first. Doris died on Tuesday, November 13, 2018, at the age of 93 years, 5 months, and 26 days. Blessed be her memory. She is survived by her 7 children, Kathie Ackerman of Jonesville, MI, Dennis (Lori) Petrich of Rosemount, David (Nancy) Petrich of Holland, Steven (Peg) Petrich of Sacred Heart, JoAnn (Mike) Peterson of Maple Grove, Tim (Michelle) Petrich of Marshall, Scott (Connie) Petrich of Springfield, MO; 34 grandchildren; 21 great-grandchildren (and another on the way); sisters, Norma Siewert of El Paso, TX, Carolyn Parker of Bellevue, NE; brother-in-law, Corky Smith of San Marcos, CA; nieces, nephews, other relatives and friends. Doris was preceded in death by her parents; husband, Duane; sister, Ethel Smith; daughter-in-law, DeAnna Petrich; and son-in-law, Larry Ackerman.

The family of Doris Mae Petrich created this Life Tributes page to make it easy to share your memories.

Send flowers to the Petrich family.