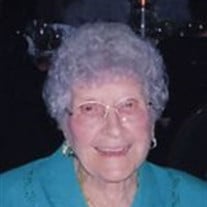 Dorothy Bjornebo, age 87, died Wednesday, February 27, 2008, at Avera Hospital, Sioux Falls, SD. A memorial service celebrating her life will be a Christ Lutheran Church in Cottonwood, MN, on Tuesday, March 4th at 2:00 p.m. with interment of her cremains in Christ Lutheran Cemetery. A visitation will be held at Hamilton Funeral Home on Monday, March 3rd from 5:30 p.m. to 7:00 p.m. Dorothy was born on Tuesday, February 22, 1921, in Fergus Falls, MN. The family farmed around Goose Lake (Lyon County), where she attended country schools, graduating from eighth grade at the age of 12. Her family then moved to Cottonwood, where Dorothy graduated from Cottonwood High School in 1938. She worked as a babysitter/housekeeper at various homes in Marshall until her family moved to Fergus Falls. There she began a long history of working in restaurants, either as a waitress or a cook. With the demand for women workers during WWII, Dorothy went to Long Beach, CA, joining the ranks of Rosie the Riveter at Douglas Aircraft turning out B-17s. Edwin Bjornebo and she were married in Yuma, AZ on April 6, 1943. After Edwin’s discharge of the Army, they returned to Cottonwood, where they farmed and raised their family. Dorothy worked in the local restaurants, and, eventually, had her own restaurant for a short time. Later, Dorothy worked and cooked in various Marshall restaurants. If you ate one of the memorable truly homemade pizzas from Edward’s Pizza, if you enjoyed a finely cooked steak at The Chalet, you likely enjoyed some of Dorothy’s creations. When HyVee came to Marshall, Dorothy worked for it, first in the deli and later as a cashier until her retirement. She was proud to say she worked at HyVee even before it opened its doors to the public. Dorothy was a long time member of MN TOPS 1574, attaining KOPS standing. She enjoyed the friendship of the members and the benefits of the program. In 1993 Dorothy and Edwin retired to Marshall. Friends and family will remember Dorothy for her excellent cooking and baking, second only to her favorite pastime of grocery shopping. She would go to HyVee for four items and come out with nine bags of groceries. At 87 she was still looking for the perfect pudding or omelette pan and still trying out new recipes. She also was an avid reader, a wicked card and board game player, a crotcheter of beautiful afghans, a talented conversationalist, and a generous, spirited lady. Dorothy had spunk in spades. When she was 15, she had a spinal fusion at Gillette Children’s Hospital to correct a curvature of the spine, likely due to a mild case of polio. Later in life and probably as residuals of this disease, she broke her right leg six times. She met each setback with grit and determination to return to life as normal, which she did. She was her granddaughter’s number one fan and faithfully followed Kristin’s high school sport activities. Everyone looked forward to Dort’s calico beans at the sports banquets. Dorothy is survived by her children, Jerry and Renee Bjornebo, Jonna Bjornebo, of Marshall, Randall Bjornebo and Brenda Jenkins, of Richfield; a very special granddaughter, Kristin (and Todd) Johnson; two dear great-granddaughters, Abby and Ashley Johnson, of Mahnomen; siblings, Donald (and Jenny) Reishus, of Dupuyer, MT, Floyd (and Linda) Reishus, of Bozeman, MT, Patricia Russo, of Mercer Island, WA; and sisters-in-law, Ann Reishus of Cody, WY, and Helen Bjornebo Reishus, of Granite Falls; Edwin’s siblings, Arvid and Jean Bjornebo, of Marshall, Morris and Phyllis Bjornebo, of Oakdale, Leif and Nellie Bjornebo, Arvilla Berg, Yvonne and Murl Johnson, all of Cottonwood; as well as by numerous and well loved nieces and nephews. She was preceded in death by her parents, Sondre and Inez [Underhill] Reishus Vallevand; husband, Edwin in 1999; two sisters, Elizabeth Collins and Deanna Bator; five brothers, Edwin, Theron, Richard (and Lucille), Randall (and Barbara), Lloyd Reishus; a nephew, Karl Reishus; and by Edwin’s siblings and spouses, Harold and Hjordis Allen, Fridtjof Bjornebo, Harold and Betty Bjornebo, Kenneth and Gladys Bjornebo; sisters-in-law, Judy and Rose Bjornebo; brother-in-law, Elmer Berg; and nephew, Wayne Allen. Mother loved the splendor of morning and evening skies, the glory of the stars and that old magic moon, the sound of a train in the distance and falling rain, the brilliant colors of fall, the adventure of travel, all flowers but especially deep pink peonies, rainbow, Elvis Presley’s singing, and coffee. She believed in the truth of children, worried about small creatures in winter storms, and looked for the good in others. She was our anchor as well as the wind in our sails. She will be with us always, and this is our comfort. In Loving memory Of Dorothy Ruth (Reishus) Bjornebo

The family of Dorothy Ruth Bjornebo created this Life Tributes page to make it easy to share your memories.

Send flowers to the Bjornebo family.