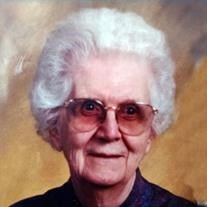 Dorothy Johnson, age 98, of Sherburn and formerly of Lynd, Minnesota, died on Monday, May 28, 2018, at Temperance Lake Ridge Assisted Living in Sherburn. Memorial Services will be held at 2:00 p.m. Sunday, June 24, 2018, at the Hamilton Funeral Home in Marshall. Visitation will be held one hour prior to the service, from 1:00 – 2:00 p.m., also at the Hamilton Funeral Home. Interment will follow in the Lynd City Cemetery. The family then invites attendees to a reception at the Lynd School for fellowship after the committal. Dorothy Johnson, age 98, formerly of Lynd, Minnesota, died on Monday, May 28, 2018, at Temperance Lake Ridge Assisted Living in Sherburn, Minnesota, where she had lived since 2007. Funeral Services are 2:00 p.m. Sunday, June 24, 2018 at Hamilton Funeral Home in Marshall. Interment will be in the Lynd City Cemetery, followed by a reception at the Lynd School. Visitation will be held one hour prior to the service on Sunday, from 1:00 p.m. – 2:00 p.m. at the Hamilton Funeral Home. Dorothy LaVonne Johnson was born on April 4, 1920, in Slayton, Minnesota, to Carl and Ida (Anderson) Lind. She was an only child who grew up in Lake Wilson and Balaton. Dorothy graduated from Balaton High School in 1938 and remembers winning many Spelling Bees during her school years. She was united in marriage to Elmer Johnson on May 10, 1942. At the time of her father’s death in 1936, Dorothy’s mom hired Elmer to manage the family farm and their friendship began. While Elmer served in WWII, Dorothy worked in a defense plant in Tacoma, Washington. She told stories of her and her mom traveling cross country by train to various military bases. After Elmer was discharged, Dorothy and Elmer farmed near Balaton and Arco before moving to Lynd in 1960. She was a loving homemaker while raising their two children, Doug and Diane. After moving to Lynd, Dorothy went to work as a nurse’s aide at the Marshall Nursing Home and then worked in Food Services at Southwest Minnesota State University, where she retired in 1983. After leaving Lynd, Dorothy lived at Windsong Apartments in Marshall before moving to Temperance Lake Ridge in Sherburn. Dorothy loved cooking and baking, visiting with friends, camping and had a great passion for animals, especially their horses, dogs and cats. The highlight of her life was her children, grandchildren, great grandchildren and her great, great granddaughter. She enjoyed playing many different card games, bingo and dominoes and also spent endless hours making craft items for friends and family. Dorothy was kind hearted, selfless and always offered an open ear. She is survived by her two children; Doug Johnson (Susan) of Loveland, Colorado, Diane Sharp (Barry) of Fairmont, Minnesota; 3 grandchildren, Kristi Bulfer, Suzanne Sharp and Cole Sharp; 5 great grandchildren, Sommer Manwarren, Levi and Lili Bulfer, Amari Frazier and Kane Sharp; 1 great, great grandchild, Lyanna Burkhart; one sister-in-law, Dolores Smith, nieces and one nephew. She was preceded in death by her parents, husband, grandson, Shane Sharp and nephew, Alan Johnson. Blessed be her memory.

Dorothy Johnson, age 98, of Sherburn and formerly of Lynd, Minnesota, died on Monday, May 28, 2018, at Temperance Lake Ridge Assisted Living in Sherburn. Memorial Services will be held at 2:00 p.m. Sunday, June 24, 2018, at the Hamilton Funeral... View Obituary & Service Information

The family of Dorothy LaVonne Johnson created this Life Tributes page to make it easy to share your memories.

Dorothy Johnson, age 98, of Sherburn and formerly of Lynd, Minnesota,...