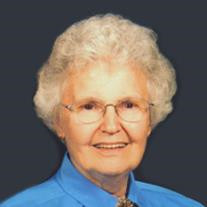 Dorothy Mildred Lang, age 94, of Bigfork and formerly of Russell, Minnesota, passed away peacefully on Monday, August 8, 2016, at the Bigfork Valley Hospital in Bigfork, Minnesota. Funeral Services are 11:00 AM Friday, August 11, 2016, at Christ Evangelical Lutheran Church in Marshall. Following a reception, interment will be in the Russell Cemetery. Visitation will be held one hour prior to the service, from 10:00 –11:00 AM, on Friday at the church. Clergy Officiating: Rev. Keith Schreiner Organist: Teri Knutson Congregational Hymns: I Know That My Redeemer Lives / Amazing Grace / Beautiful Savior Honorary Casket Bearers: Troy Peck, Trent Isaacson Active Casket Bearers: Galen Grant, Bill Driscoll, Larry Olson, Mick Williams, Darrell Gray, Elmer Green. Dorothy Mildred Anderson was born on August 7, 1922, to parents Roy and Lela (Strong) Anderson in Marshfield, WI. At a young age the family moved to a farm west of Russell. She attended Russell Public School and then attended Northwest Institute in Minneapolis for medical technology. She went on to work as a medical technician at hospitals in Staples, MN and Fort Dodge, Iowa. On April 12, 1944, Dorothy was united in marriage to Maurel Franklin Lang at the Zion Evangelical Lutheran parsonage in Tyler, Minnesota. The couple made their home and farmed southwest of Russell. Upon retirement they lived in Russell for 18 years before moving to Boulder Estates in Marshall. The couple was blessed with over 66 years of marriage when Maurel passed away in August, 2011. In 2013 Dorothy moved to Bigfork to be closer to family. Dorothy enjoyed spending time with family, camping, playing cards, reading and bowling. Dorothy died on Monday, August 8, 2016, in Bigfork, Minnesota at the age of 94 years, and 1 day. Blessed be her memory. She is survived by her loving family, daughter and son-in-law La Vonne (Keith) Peck of Max, MN; two grandchildren, Kristin (Trent) Isaacson of St. Stephen and Troy (Jennifer) Peck of Minnetonka; three great-grandchildren, Allison, Benjamin and Camille Peck; sisters, Evelyn Zitterow of Burnsville, MN and Ruth Wig of Brainerd, MN; nieces and nephews and many other relatives and friends. She was preceded in death by her parents and husband, Maurel. The family invites attendees to the church basement for a luncheon following the service.

The family of Dorothy Mildred Lang created this Life Tributes page to make it easy to share your memories.

Dorothy Mildred Lang, age 94, of Bigfork and formerly of Russell,...