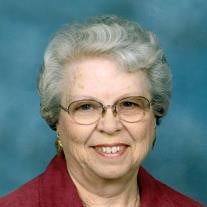 Dorothy Snyder, age 87, of Marshall, Minnesota, passed away on Sunday, September 3, 2017, at Morningside Heights Care Center in Marshall, Minnesota. Memorial Services are 1:30 p.m. Friday, September 15, 2017, at the Hamilton Funeral Home in Marshall, Minnesota. Interment will be at a later date in the Marshall Cemetery. Visitation will be held one hour prior to the service, from 12:30 – 1:30 p.m., Friday at the Hamilton Funeral Home. Clergy Officiating: Pastor David Johnston Organist: Loronda Schueler Congregational Hymns: There’s Something About That Name / Jesus Loves Me / Amazing Grace / Softly and Tenderly Honorary Urn Bearers: Roger Lee, Robert Lee, David Wilson, Allen Lee, Dwayne Lee, Gordie Lee Dorothy LeVon Rosvold was born June 26, 1930, in Montevideo, Minnesota. She was the daughter of Wilhelm and Selma (Lee) Rosvold. Dorothy was baptized and confirmed at Christ Lutheran Church in Cottonwood. She attended school there and graduated from Cottonwood High School with the class of 1947. In September of 1947, Dorothy was united in marriage to Morris Bjornebo in Iowa. The couple spent several years together and had two daughters, Cheryl and Sandra. After a divorce, Dorothy met Warren Snyder on a blind date and the two were married on October 16, 1960, in Minneapolis. They shared nearly 57 years of marriage together and had two children: Shelly and Brian. Dorothy and Warren lived in rural Marshall until 2000, when they moved from the farm into Marshall. Having spent many happy summers on Lake Koronis, they then moved to Paynesville for three years before settling back in Marshall. Dorothy worked many years as a farm wife and loving homemaker. She also did some work at Skewes Jewelry in Marshall. Dorothy was a member of Christ Lutheran Church in Cottonwood, then Albright United Methodist Church in Marshall where she was active in the Seeker’s Club, and was most recently part of Cornerstone United Methodist Church. She was also a member of the Order of the Eastern Star. Dorothy loved to sew and also thrived on sharing coffee and snacks at 3:00 p.m. with family and guests in her home. Dorothy Snyder entered her heavenly home on Sunday, September 3, 2017 at the age of 87 years, 2 months, and 10 days. Blessed be her memory. Dorothy is survived by her husband, Warren Snyder of Marshall; 4 children, Cheryl (and Tom) Doom of Albany, MN, Sandra (and Dan) Labat of Marshall, MN, Shelly (and Thomas) Vacina of Winder, GA, Brian (and Nancy) Snyder of Eleva, WI; 10 grandchildren, Karol Sebastian, Karen Doom, Kristen (Brian) Thelen, Peter (Andrea) Doom, Todd (Marie) Labat, LuAnn (Ron) Springer, BJ (Alyssa) Labat, Bridget (Michael) Beck, Monica Snyder, Luke (Bethany) Snyder; 15 great-grandchildren; 4 great-great-grandchildren; brother, Arlen (and Jane) Rosvold of Brookings, SD; nephews, nieces, other relatives and many friends. Dorothy is preceded in death by her parents, Wilhelm and Selma Rosvold; and first husband, Morris Bjornebo.

The family of Dorothy LeVon Snyder created this Life Tributes page to make it easy to share your memories.

Dorothy Snyder, age 87, of Marshall, Minnesota, passed away on...

Send flowers to the Snyder family.