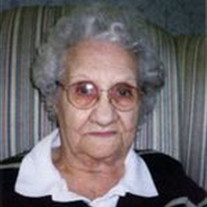 Dorothy M. Williams, age 88, of Russell, passed away at the Colonial Manor Care Center in Balaton on Tuesday, December 22, 2009. Funeral services are scheduled for 10:30 AM on Monday, December 28, 2009, at Grace First Parish in Russell. Burial will be in the Russell City Cemetery. Visitation will be held one hour prior to the service, at church. Dorothy Mae Grove was born in Russell on May 9, 1921, to parents William and Addie (Bowerman) Grove. In her youth she was baptized at the First Baptist Church. She graduated from Russell High School in 1939. On June 25, 1939, Dorothy was united in marriage to Arthur Owen Williams at her parents’ home in Russell. They had three children: Jerome, Larry, and David. Dorothy spent most of her life in Russell, where she was a proud member of the First Baptist Church until it closed. Dorothy worked for Swift & Co. until her retirement. She moved into the Colonial Manor in Balaton in 2008. Dorothy was a very pleasant and caring person who truly enjoyed visits from family and friends. She had reached the age of 88 years, 7 months and 19 days. She is survived by her daughter-in-law, Barbara J. Williams of Russell; grandchildren, Julie (and Scott) Lufkin of Milwaukie, OR, Matt (and Michelle) Williams of Gladstone, OR, Stacy (and Sarah) Stanton of Watertown, SD, Becky (and Jim) Burns of Russell, and Jay Williams of Russell; great-grandchildren, Josh & Kyle Lufkin, Cortney & Shane Williams, Ashley Thompson, Hunter & Brooke Burns, and Sierra, Skyler, Sydney, and Sianna Stanton; sister-in-law, Jeanette Williams of Marshall and Martha Williams of Albany, OR; and many other nieces, nephews, relatives, and friends. She was preceded in death by her husband, Arthur; sons, Jerome (Jim), Larry (Bill), and David; parents; brothers, Charlie and Robert; and sister, Gladys. Blessed be the memory of Dorothy Williams

Dorothy M. Williams, age 88, of Russell, passed away at the Colonial Manor Care Center in Balaton on Tuesday, December 22, 2009. Funeral services are scheduled for 10:30 AM on Monday, December 28, 2009, at Grace First Parish in Russell. Burial... View Obituary & Service Information

The family of Dorothy Mae Williams created this Life Tributes page to make it easy to share your memories.

Dorothy M. Williams, age 88, of Russell, passed away at the Colonial...