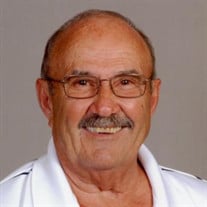 Doug Heise, age 76, of Marshall, Minnesota, died on Monday, December 20, 2021, at the Avera Morningside Heights Care Center in Marshall. Memorial Services will be held at 11:00 a.m. on Tuesday, December 28, 2021, at First Lutheran Church in Marshall, Minnesota. Interment with military honors will follow in the Marshall Cemetery. Visitation will be held from 5:00 – 7:00 p.m. on Monday, December 27, 2021, at the Hamilton Funeral Home in Marshall. Visitation will continue one hour prior to the service on Tuesday, from 10:00 a.m. until the time of services at 11:00 a.m., at the church. At the request of the family, masks are required at this service. Masks will be provided at each location. Thank you for understanding. In lieu of flowers, memorials are preferred to Prairie Home Hospice or Avera Hospice in Marshall. Douglas Eugene Heise was born June 27, 1945, in Canby, Minnesota, to Walter and Margaret (Swenson) Heise. He grew up in Marshall and attended school at Marshall Public Schools. During high school, Doug joined the United States Army and served his country overseas in Korea during the Vietnam War. Upon returning home, he married his high school sweetheart, Rosemary Paulson, on October 1, 1966. The couple made their home in Marshall and Doug worked for many years as a salesman for various beer distributors. He was with Grong Sales and Locher Brothers before they became Beverage Wholesalers. Doug enjoyed his work which allowed for visiting with many people that he encountered during his day. He was a longtime member of First Lutheran Church in Marshall and active in the VFW, American Legion, and Eagles Club. Doug was a very giving and genuine person. He liked to entertain others and enjoyed many strong friendships Doug was a volunteer driver for Western Community Action and hosted many events where he would master the grill for family and friends. Most of his spare time was spent hunting, fishing, golfing, or riding his Harley. He will be missed by many. Doug Heise joined his wife in Heaven on Monday, December 20, 2021. He had reached the age of 76 years, 5 months, and 24 days. Blessed be his memory. He is survived by his 3 siblings, Carol (and Bill) Merritt of Mankato, Shari (and Mike) Verdeck of Marshall, Mike (and Marsha) Heise of Phoenix, AZ; brother-in-law, Mike Paulson of Tracy; sister-in-law, Terry Malikowski of Willmar; close friends, Ed Scheele of Marshall, Sandy (and Terry) Culhane of Marshall; nieces, nephews, other relatives, and many friends. Doug was preceded in death by his parents, Walter and Margaret Heise; wife, Rosemary Heise; brother, Dennis Heise; and brother-in-law, Rodger Malikowski.

The family of Doug Eugene Heise created this Life Tributes page to make it easy to share your memories.

Send flowers to the Heise family.