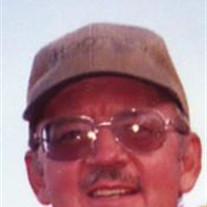 Tracy: Douglas A. Bruns, age 55, of Tracy, passed away at his residence on Sunday, March 6, 2011. Celebration of his life will be 10:00 A.M. Wednesday, March 9th at the Hamilton Funeral Home in Marshall. Visitation will be one hour prior to the service. Burial will be in the Trinity Lutheran Cemetery in Lucan. Douglas Alan was born to Virgil and Gwen (Norcutt) Bruns on April 7, 1956 in Redwood Falls, Minnesota. He was baptized and confirmed at the Trinity Lutheran Church in Lucan, and was a 1974 graduate of the Wabasso High School. On March 6, 1987, Doug was united in marriage to Eva Noren in St. Paul, Minnesota. They lived in Marshall and Tracy where he was a licensed Journeyman Plumber and was employed by G-H Plumbing and Heating in Tracy. Due to health complications, he retired in 1999. Doug enjoyed spending time with hi family and friends in the outdoors. He went on many hunting trips to Wyoming and South Dakota where he hunted antelope, mule deer and white tail deer. He also hunted white tail deer and pheasants in Minnesota. He loved going on spring turkey hunts in Minnesota and South Dakota. He enjoyed fishing both Minnesota lakes and rivers. He enjoyed shooting sports with his family and friends using shotguns, rifles and handguns for various shooting disciplines. He enjoyed woodworking in his shop in Tracy and could create anything from seven foot canoe shelves to carpentry finish work. He also loved sharing his knowledge of all woodworking with others around him. Doug passed away at his residence in Tracy on Sunday, March 6, 2011. He had reached the age of 54 years, 10 months and 30 days. He is survived by his wife, Eva of Tracy; son, Cody of Tracy; mother, Gwen of Lucan; brother, Dean (and Deb) of Marshall; sister, Cindy (and Steve) Petersen of Marshall; also many other relatives and friends. He was preceded in death by his father, Virgil; sister, Sheila Bruns; and nephew, Quintin Noren. Blessed Be His Memory

Tracy: Douglas A. Bruns, age 55, of Tracy, passed away at his residence on Sunday, March 6, 2011. Celebration of his life will be 10:00 A.M. Wednesday, March 9th at the Hamilton Funeral Home in Marshall. Visitation will be one hour prior to... View Obituary & Service Information

The family of Douglas Alan Bruns created this Life Tributes page to make it easy to share your memories.

Send flowers to the Bruns family.