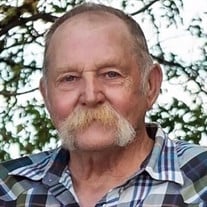 Doug Gilbertson, age 71, of Taunton, Minnesota, died on Friday, March 4, 2022, under the care of hospice at his home. Memorial Services are 7:00 p.m. Thursday, March 10, 2022, at the Hamilton Funeral Home in Marshall, Minnesota. The public is invited to Military Honors, provided at 3:45 p.m., also at the Hamilton Funeral Home. Visitation will be held from 4:00 – 8:00 p.m. Thursday, March 10, 2022, also at the Hamilton Funeral Home in Marshall. Douglas Duane Gilbertson was born on June 11, 1950, in Marshall, Minnesota. He was the son of Mervin and Helen (Worden) Gilbertson. Doug grew up in Marshall where he attended school and graduated high school with the class of 1968. He joined the United States Army and served during Vietnam. Doug spent 11 years in the Army before returning home with an Honorable Discharge to care for his sons. After being discharged, Doug moved back to Marshall and met his soulmate Ms. Celia Jungclaus. One thing led to another and the two were united in Marriage on March 1, 1980, at the First Lutheran Church in Marshall. The couple made their home briefly in Illinois before moving to the Twin Cities where they raised their family for 23 years. In 2005, the couple moved to Taunton where they currently reside. Doug worked his entire career as a communications technician and eventually retired from Sprint. He was a member of the Russell American Legion, the Marshall VFW, and the Eagles Club. He was proud of his military service and will be remembered by many as an honorable man who acted with integrity. Doug’s interests in life included spending time with family and friends at home, playing horseshoes, gardening, canning, reading Tom Clancy novels, doing crossword puzzles, watching the history channel, rescuing, and caring for animals, spending time outside in nature, tinkering in his garage and helping Celia with her many repurposing projects. He also really enjoyed cooking - his specialties being chili and stew. Douglas Duane Gilbertson passed away on Friday, March 4, 2022, at his home in Taunton, with his family by his side after a short battle with cancer. He reached the age of 71 years, 8 months, and 21 days. Blessed be his memory. He is survived by his wife of 42 years, Celia Gilbertson of Taunton; five children, Michael Gilbertson of Coon Rapids, John Gilbertson of Marshall, Kari (Jake) Meyer of Mounds View, Christopher Briggs of Safford, AZ, Cory (Brenda) Briggs of Robbinsdale; seven grandchildren, Miriah Meyer, Dylan Gilbertson (Sadie Graham), Marianah Schaffer, Andrew Meyer, Mathew Gilbertson, Dylan Venhuizen, Auggie Briggs; great-grand-son, Xzavier Gilbertson; three siblings, Donald (Jo Ann) Gilbertson of Marshall, Deb Gilbertson of Marshall, and Denise Myhrberg of Marshall. Special friends include Kenny Rogers of Monticello and Suzanne Bischof of Zurich, Switzerland; second family- of Marilyn Groff, Robin (Stan) Stelter of Lynd, Randy (Patty) Groff of Cottonwood, Roxie (Randy) Serreyn of Marshall, Rolly (Chuck) Muller of Marshall as well as many nieces, nephews, extended family, and friends. Doug was preceded in death by his mother, Helen Gilbertson; father, Merv Gilbertson (Marilyn Groff); and his son, Duane Gilbertson.

Doug Gilbertson, age 71, of Taunton, Minnesota, died on Friday, March 4, 2022, under the care of hospice at his home. Memorial Services are 7:00 p.m. Thursday, March 10, 2022, at the Hamilton Funeral Home in Marshall, Minnesota. The public... View Obituary & Service Information

The family of Douglas Duane Gilbertson created this Life Tributes page to make it easy to share your memories.

Send flowers to the Gilbertson family.