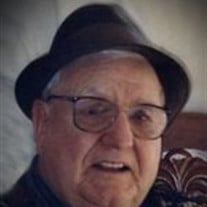 Douglas H. Hamilton, age 86, of Atwater, passed away on Wednesday, July 30, 2008 at Bethesda Pleasant View in Willmar. Funeral services will be at 2:00 P.M. Saturday, August 2, 2008 at Bethlehem Lutheran Church in Atwater. Burial will be Fairview Cemetery in Willmar. Visitation will be at the Church beginning at Noon and continuing until the time of the service on Saturday. Douglas Harrison Hamilton was born on August 21, 1921 to Vernon and Mae (Warner) Hamilton in rural Sparta, Wisconsin. He attended the Bear Lake School through 8th grade. Doug’s nickname growing up was “Bones”. Doug was baptized at the Seventh Day Adventist Church in Willmar. As a young man, he began working in Beloit, WI for a short time and then attended and graduated from Machinist School in Chicago and Detroit. He was employed as a machinist for two years, but asthma attacks forced him to resign from this profession. Doug purchased a dump truck and hauled loads for various employers in Michigan. He also worked at the Page Laundry and Reynolds Aluminum in Chicago. Doug then moved to Minnesota where he was employed at the Hormel - Armour Meat Packing Plant in St. Paul. On January 16, 1947, Doug married the love of his life, Gertrude Vivian Pierce in Webster, South Dakota. They were married by Justice of Peace Sam Buehler, (who, according to Doug and Gert, chewed tobacco). Doug and Gert made their first home in Litchfield for awhile and Doug tried his hand as a Fuller Brush salesman, which lasted “one whole day”. He sold Bowes auto parts for 8 months, and in1949 he became a car salesman for the Albright and Keintz Chevrolet dealership in Atwater. Doug became self- employed in 1954 when he opened Hamilton Motor Sales in Grove City. In 1957 he moved his car lot to Atwater, right next to Gene Denton’s Sinclair Station. In 1961 Doug moved the car lot to it’s present location which was next to Lloyd Anderson’s Mobil Station. He also built Gert’s dream home right behind the car lot, where they entertained many relatives and friends throughout the years. There was always an available chair at their table for anyone. Gert passed away on November 22, 1995. Throughout the years, Doug’s son, Bud has gradually taken over the car business. Doug still managed to spend a couple hours over at the office every day until his health would no longer allow him. Doug retired from the car business at his death. Doug passed away Wednesday, July 30, 2008 at the Bethesda Pleasant View Home in Willmar. He had reached the age of 86 Years, 11 months and 9 days. He is survived by his two sons, Douglas V. II (and Chari) of Marshall, and Bud E (and Terri) of Atwater; 5 grandchildren, Rebecca (and Scott)Watson of Madison, MN, Andrea Linville and Elizabeth (and Josh) Ranslem of Marshall, MN, Heather Hamilton of Atwater and Jill Hamilton of Minneapolis; 7 great grandchildren, Zachary (and Erin) Watson of Willmar, Andrew, Nicholas and Brady Watson of Madison, Allison and Amanda Linville of Marshall and Davenport, IA and Ian Hamilton of Atwater; and very special friend Kari Schultz of Atwater; many nieces, nephews and friends. He was preceded in death by his parents; his wife, Gert; grandson, Douglas Jonathan III. and brothers, Wayne and Floyd. During his lifetime, Doug enjoyed fishing, the car business, traveling, fishing, visiting with friends and relatives, hunting and fishing, visiting shut-ins and those in Nursing homes and fishing. His cell phone helped him to keep in contact with relatives and friends on the weekends. Doug was a faithful member of the Seventh Day Adventist Church in Litchfield at the time of his death. Blessed Be The Memory of Douglas H. Hamilton.

Douglas H. Hamilton, age 86, of Atwater, passed away on Wednesday, July 30, 2008 at Bethesda Pleasant View in Willmar. Funeral services will be at 2:00 P.M. Saturday, August 2, 2008 at Bethlehem Lutheran Church in Atwater. Burial will be Fairview... View Obituary & Service Information

The family of Douglas Harrison Hamilton created this Life Tributes page to make it easy to share your memories.

Douglas H. Hamilton, age 86, of Atwater, passed away on Wednesday,...

Send flowers to the Hamilton family.