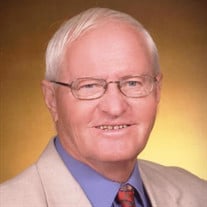 Duane Aden, age 88, of Marshall, Minnesota, died on Wednesday, May 19, 2021, at the Prairie Home Hospice – McLaughlin House in Marshall. Memorial Services will be 1:00 p.m. Monday, May 24, 2021, at First Lutheran Church in Marshall, Minnesota. Interment will follow in the Aden family plot. Graveside gathering is scheduled for 4:30 p.m. Monday at the Bethania Cemetery in Rosholt, South Dakota. A Traditional Visitation will be held from 5:00 – 7:00 p.m. Sunday, May 23, 2021, at the Hamilton Funeral Home in Marshall. A Prayer Service is scheduled for 7:00 p.m. and a time to share memories will follow. Memorial Visitation will continue Monday, one hour prior to the service, from Noon – 1:00 p.m., at First Lutheran Church in Marshall. Duane Dell Aden was born on a farm in rural Milbank, South Dakota, on October 18, 1932. It was at the time in the midst of the Great Depression. Parents were Eitel Jacob and Louise Aden. When he was 5 years old the family moved to Rosholt, South Dakota to start a life in a new community. Duane attended 12 years at the Rosholt School. He was active in all sports including basketball which was his favorite. In 1950, he started college at the University of South Dakota. In 1952, he transferred to South Dakota State University, where he graduated in 1954 with a B.S. in Civil Engineering. In June of the same year, he married Ellen Johnson from Sisseton, South Dakota. They moved to Iowa where Duane worked for the Iowa Highway Department. In 1955, they moved to Sioux Falls, South Dakota, where Duane was employed by the South Dakota Highway Department. This was around the time they were starting to build the Interstate Highway System. Duane was the Principal Engineer during the construction of I-29, I-229, and I-90. In 1960, Duane accepted a position as Assistant City Engineer for the City of Sioux Falls. During this time, he was involved in major water and sewer projects, major street projects, parking structures, and many residential developments. In 1968, Duane accepted a position as City Engineer for the City of Marshall, Minnesota. Marshall was at a stage of major growth due to the beginning of Southwest Minnesota State College and other enterprises. Some of Duane’s major engineering projects in Marshall included: Tiger Lake Storm Water System, Legion Field Swimming Pool Complex, Original Wastewater Treatment Facilities, Major Airport improvements, Channel Parkway construction, Country Club Drive construction, Independence Park Storm Water System, Industrial Park 1 and 2 Development, Public Works Maintenance Facilities, and many residential developments. In 1985, he was appointed to the City Administrator position which he held until his retirement in 1994. During Duane’s time with the City of Marshall he held many positions including: City Engineer, City Administrator, Building Code Official, Zoning Administrator, Public Water Administration, City Forester, and Airport Manager. Duane was an active member of many professional organizations where he served as president: Minnesota Society of Professional Engineers, Minnesota City Engineers Association and Minnesota Council of Airports. He was also an active member of the Minnesota City Administrators Association and Minnesota Public Works Association. Duane was involved in the local community serving as President for the following organizations: Marshall Area Chamber of Commerce, Marshall Jaycees, First Lutheran Church Council and Local Condo Associations. In addition, he was involved with the Marshall Industries Foundation, the development of the YMCA in Marshall, where he served on the Board and was the Board Liaison between the Architect and the Contractors. In 2006, Duane was honored to receive the first Rosholt High School Outstanding Alumnus of the year. Duane was an avid sportsman and a member of the Thunder Hawk Sportsman Club. He was fortunate to be able to enjoy Alaska Salmon and Halibut fishing trips. He annually attended fishing trips in Canada to many locations only reachable by Bush Plane. He enjoyed annual trips to Lake Michigan for Salmon fishing, North Dakota for Waterfowl hunting, and South Dakota for Pheasant hunting. He was fortunate to have a cabin on Lake Minnewaska for nearly 50 years which will be enjoyed by the family for generations to come. Duane is survived by his wife, Connie Stover; children, Katie (Curt) Pedro, JoAnn Aden, Lance (Dawn) Stover, David (Michelle) Stover; grandchildren, Suzanne (Stephen) Graham, John Abraham, Cole Pedro, Mary Abraham, with Ryan, Wade, Lauren, Allie and Emily Stover; honorary grandson, Tarek Chaumon; great-grandsons, Landon and Elliott Graham; and sisters, Elaine Bapp and Lorraine Read. He was preceded in death by wife, Ellen Aden; children, James and Patricia Aden; great-grandson, Benjamin Graham; and parents, Eitel and Louise Aden. Our family would like to express our gratitude to the Angels of Care and Compassion at the McLaughlin House and our ever-supportive friends: Bob, Ray, and Lu. If you desire to give a memorial, in lieu of flowers the family suggests Prairie Home Hospice and Community Care in Marshall.

The family of Duane Dell Aden created this Life Tributes page to make it easy to share your memories.

Send flowers to the Aden family.