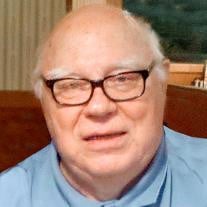 Duane Hill, age 85, of Ivanhoe and formerly of Marshall, Minnesota, died on Friday, August 3, 2018, at Divine Providence Health Center in Ivanhoe, Minnesota. Funeral Services are 2:00 p.m. Thursday, August 9, 2018, at First Lutheran Church in Marshall, Minnesota. Interment will be Friday morning in the Marshall Cemetery. Visitation will be held one hour prior to the service, from 1:00 – 2:00 p.m., on Thursday at First Lutheran Church in Marshall. Duane Collins Hill was born April 16, 1933, to Shirley and Helen (Hostitler) Hill in Tracy, Minnesota. He was baptized as an infant and confirmed in his youth in the Methodist faith. Duane attended grade school in Elysian, Minnesota, graduating with the class of 1951. He furthered his education at Mankato State University before joining the United States Army. After returning home Duane went back to South Dakota State University in Brookings, South Dakota, to earn his Master’s degree in education. He spent many years following his passion by teaching in Wood Lake. On April 18, 1964, Duane was married to Bonnie Burg at Our Savior’s Lutheran Church in Montevieo. Duane then earned his doctorate from the University of Minnesota in 1968. His next stop was Cosmos, Minnesota, before spending 18 years in Albany. He then was superintendent of schools in Chandler, Balaton, and Milroy, Minnesota. Duane retired in 1998 and he and Bonnie moved to Marshall. When he needed more care, Duane went to Divine Providence Health Center in Ivanhoe in the spring of 2017. Duane was active in the Albany Lions Club and was a faithful member of First Lutheran Church in Marshall. His other enjoyments in life included reading about history and watching sporting events, especially baseball and football. Duane Hill died August 3, 2018, in Ivanhoe, Minnesota, at the age of 85 years, 3 months, and 18 days. Blessed be his memory. He is survived by his two sons, John Hill of Marshall, James Hill, of Marshall; brother, Tom (and Fran) Hill of Starbuck; nieces, nephews, other relatives, and friends. Duane was preceded in death by his parents, Shirley and Helen Hill; wife, Bonnie Hill; brother, Dwight “Lefty” Hill; and sister, Valentine Whilhite.

The family of Duane Collins Hill created this Life Tributes page to make it easy to share your memories.

Duane Hill, age 85, of Ivanhoe and formerly of Marshall, Minnesota,...

Send flowers to the Hill family.