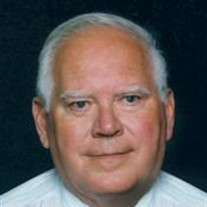 Marshall: Duane D. Londgren, age 83, of Marshall, passed away at the Minneota Manor on Friday, May 20th at the age of 83. Funeral services will be 11:00 A.M. Wednesday, May 25, 2011 at Christ Evangelical Lutheran Church in Marshall. Burial will be in the Marshall Cemetery. Visitation will be 4:00 P.M. to 8:00 P.M. with a 7:00 P.M. prayer service Tuesday at the Hamilton Funeral Home. Visitation will continue at the church on Wednesday, one hour prior to the service. Duane Donald was born on April 12, 1928 in Russell, Minnesota to Arthur W. (Bill) and Edith (Olson) Londgren. He was baptized and confirmed at First Lutheran Church in Marshall. Duane graduated from Lynd High School in 1946. He was a member of the Lynd Basketball Team that participated in the State tournament, and he was named to the 1946 All-state First Team. Duane also pitched for the Lynd baseball team and was the quarterback on their undefeated football team. He went on to attend and play basketball for St. Cloud State University. On November 28, 1950, Duane entered the U. S. Army and served in an artillery unit in Korea. He received an honorable discharge on August 30, 1952 at the rank of Master Sergeant. Duane was united in marriage to Shirley Jacobson on April 20, 1952 in Marshall. He was employed by Irv Peterson and Marshall Lumber. In 1959 Duane and three of his bothers-in-law opened Marshall T.V. and Appliance. Duane continued as a co-owner and manager until his retirement in 2002. Duane was a faithful member of Christ Evangelical Lutheran Church, where he served as President and Treasurer for many years and sang in the church choir. He was a Lifeguard at Camden State Park and played on the Schwan’s Dairy Softball team. Duane was also a member of the Marshall Area Men’s Chorus. During his life, Duane was an avid sports fan of the Minnesota teams including the Twins, Vikings and Gophers. He also enjoyed spending time at Camden State Park, walking, traveling, woodworking, and fixing things around home and for others. He was a gentle and devoted husband, father, and grandfather who loved to attend his childrens' and grandchildrens' musical, theater, and sporting events. Duane is survived by his wife Shirley of Marshall; three children, Jeff (Elisa) of Charlevoix, Michigan, Cheryl (Mark) Nook of Stevens Point, Wisconsin, and Susan (Harvey) Reckard of Menomonie, Wisconsin; twelve grandchildren, Brandon (Rachel), Jerusha, Trevor, Peter, Breanna, James, Mehgan (Matt) Clark, Aaron Nook, Cory Nook, Andrew (Sarah) Reckard, Laura Reckard, Nathan Reckard; one great-grandchild, Jacob; four siblings, Richard (Anita) Londgren of Thousand Oaks, California, Doug, Miff, and Betty Londgren all of Tacoma, Washington; also other relatives and friends. Duane was preceded in death by his parents. Blessed Be The Memory Of Duane D. Londgren. Please designate Memorials to Crohns Disease Foundation.

Marshall: Duane D. Londgren, age 83, of Marshall, passed away at the Minneota Manor on Friday, May 20th at the age of 83. Funeral services will be 11:00 A.M. Wednesday, May 25, 2011 at Christ Evangelical Lutheran Church in Marshall. Burial will... View Obituary & Service Information

The family of Duane D. Londgren created this Life Tributes page to make it easy to share your memories.

Send flowers to the Londgren family.