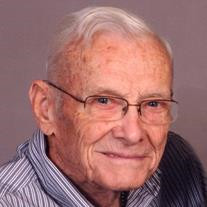 Dwayne Brinkman, age 82, of Marshall, Minnesota, passed away under Hospice care on Tuesday, November 28, 2017, at his home in Marshall. Memorial Services are 11:00 a.m. Saturday, December 2, 2017, at Cornerstone United Methodist Church in Marshall. Following a reception, interment will be in the Danebod Lutheran Cemetery, Tyler, Minnesota. Visitation will be held one hour prior to the service, from 10:00 – 11:00 a.m., Saturday at the church. Clergy Officiating: Rev. David Johnston Organist: Sandy Buesing Congregational Hymns: On Eagle’s Wings / Amazing Grace / Here I Am Lord Urn Bearers: Valerie Klukas, Carissa Stockmann, Jamie Antony, Breanna Abel, Luke Bailey, Cory Bailey Military Honors: Marshall American Legion, Post #113 Dwayne Harold Brinkman was born December 31, 1934, at home in Ashton, Iowa, to Cornelius and Christine (Hiemstra) Brinkman. He was baptized as an infant and confirmed in his youth in the Christian faith while growing up in the Ashton area. His family moved to Tyler, Minnesota in 1951 and Dwayne graduated from the Tyler High School in 1952. Dwayne served in the United States Army from 1958 – 1960 and then in the Reserves until 1967. Dwayne was united in marriage to Bonnie Christianson on July 30, 1958, at the English Lutheran Church in Tyler. The couple made their home in Tyler before being stationed in Fairbanks, Alaska, in 1958 and 1959. They returned to Tyler for a few years before moving to Marshall in 1963. Dwayne and Bonnie shared over 59 years of marriage and raised 2 daughters: Karen and Dawn. Dwayne worked for Brouwer Construction, Lyco Gas (Tyler) and Eden Gas (Marshall) in the 1960s and 1970s as an all-around maintenance and handyman. In 1977, Dwayne worked for a few years at U. C. Trailer Sales in Marshall before taking a maintenance position at the Marshall Public Schools from 1980 – 1998. He retired in 1998 but soon found part-time work with maintenance at Holy Redeemer Catholic School. Dwayne was a proud member of Cornerstone United Methodist Church and served the Marshall American Legion, Post #113. His other enjoyments in life included working on RVs, carpentry, reading, vegetable and flower gardening, fishing, camping, watching western movies, and loved tinkering and fixing on anything that could be improved. Dwayne passed away at his home on Tuesday, November 28, 2017, at the age of 82 years, 10 months, and 28 days. Blessed be his memory. Dwayne is survived by his wife, Bonnie Brinkman of Marshall; daughters, Karen Brinkman (Simon Carroll) of Lake Norden, SD, Dawn (Tom) Polfliet of Marshall; 6 grandchildren, Valerie (Jon) Klukas of Russell, Carissa (Curtis) Stockmann of Canby, Jamie Antony of Minneota, Breanna (Jameson) Abel of Sioux Falls, SD, Luke Bailey of Marshall, Cory Bailey of Marshall; 2 step-grandchildren; 6 great-grandchildren; 2 step-great-grandchildren; brother, Marvin (Carolyn) Brinkman of Tyler; nieces, nephews, other relatives, and many friends. He was preceded in death by his parents, Cornelius and Christine Brinkman, and 2 sisters, Doris (Henry) Van Nyhuis and Marjorie (Charles) Mastbergen.

The family of Dwayne Harold Brinkman created this Life Tributes page to make it easy to share your memories.

Send flowers to the Brinkman family.