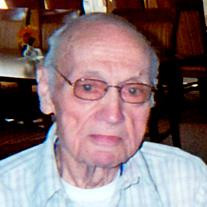 Edgar Gillund, age 91, of Marshall, Minnesota, passed away peacefully surrounded by his family on Friday, November 20, 2015, at Avera Morningside Heights Care Center in Marshall,. Memorial Services are 11:00 AM Wednesday, November 25, 2015, at Christ United Presbyterian Church in Marshall. Interment will be in the Lynd City Cemetery. Visitation will be held from 4:00 – 8:00 PM Tuesday, November 24, 2015, at the Hamilton Funeral Home in Marshall. A prayer service is scheduled for 7:00 PM. Visitation will continue one hour prior to the service from 10:00 – 11:00 AM, on Wednesday at the Church. Edgar Henry Gillund was born on September 4, 1924, in Nordland Township, Minnesota. He was the son of Henry and Clara (Johnson) Gillund. Edgar was baptized and confirmed at Hope Lutheran Church in Minneota, Minnesota. He grew up in the Minneota area and attended country school before graduating with the Minneota High School class of 1942. Edgar went on to proudly serve his country in both WWII and the Korean War. He entered the United States Navy in April of 1944 and served until 1950. He was again called upon in 1951 to serve his country until September 1952 when he received an Honorable Discharge. On November 9, 1957, Edgar was united in marriage to Frances Kor at Christ United Presbyterian Church in Marshall. The couple raised 5 children and lived in the Minneota area until moving from Minneota to Marshall in 1995. In 2012, the couple moved into Hill Street Place where they resided until January 2015 when both Edgar and Frances moved into Avera Morningside Heights Care Center. Edgar and Frances shared over 58 years of marriage together. After his time in the military, Edgar worked for various electricians in southwest Minnesota. He learned the electric trade and obtained his journeyman’s license while employed with Obe Electric in Minneota where he worked for numerous years. He was also an electrical contractor during the construction of Southwest Minnesota State University and continued working there in the maintenance department. Edgar also worked briefly for the U.S. Postal Service as a rural mail carrier. Edgar started his own electric business, Gillund Electric, in 1976 until his retirement. Although an official retirement was never his style, he continued to enjoy doing small electrical jobs and also did some part-time work with Fagen, Inc. in Granite Falls. Edgar was a lifetime member of the American Legion, where he served as District Commander from 1995-1996. He was a proud member of the VFW, the 40 & 8 Club and the Eagles. He also served on the Minneota City Council and was a member of Christ United Presbyterian Church for over 50 years. Edgar’s enjoyments in life were many. He loved his family and cherished time spent with the grandchildren and great-grandchildren. He also enjoyed vegetable gardening, fishing, bingo and storytelling and he always had a joke to share. Edgar is survived by his wife, Frances Gillund, of Marshall; children, Daryl (Julie) Gillund of Alexandria; Jeffrey (Meri Jo) Gillund of Maynard; Richard Gillund of Cedar Rapids, IA; and Valerie (Ronald) Vlaminck of Taunton; 7 grandchildren, Megan Hardesty of Richfield; Natalie (Forest) Becker of Minneapolis; Samuel Gillund of St. Paul; Jeremy Knutson of Aberdeen, SD; Stephanie (John) Koons of Taunton; Keith Vlaminck of Marshall; and Erika (Thomas) MacArthur of Canby; 6 great-grandchildren, Nora Finley, Tate and Blake Koons, Lily, Liam and Lincoln MacArthur; nieces and nephews, other relatives and many friends. He was preceded in death by his parents, Henry and Clara Gillund; daughter, Melinda McDowell; siblings and their spouses, Walt (Mary) Gillund, Lillian (Norman) Larson, Harvey (Joyce) Gillund, Marvel (Junior) Estum and Clarice (Roland) Fenton. Blessed be his memory.

The family of Edgar Henry Gillund created this Life Tributes page to make it easy to share your memories.

Send flowers to the Gillund family.