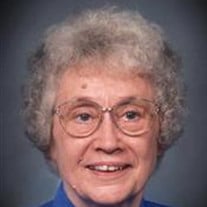 Edith Holstein, age 85, of Marshall, passed away at Avera Morningside Heights Nursing Home on Monday, December 10, 2012. Funeral services will be 11:00 A.M. Thursday, December 13, 2012 at Wesley United Methodist Church. Visitation will be at the church one hour prior to the service. Online condolences may be given at www.hamiltonfh.com. Edith Irene was born on April 2, 1927 in Whiting, Iowa to Theodore Roosevelt “Ted” and Blanche Violet (Poland) Heck. As a young girl, she and her family moved to South Dakota and then to Minnesota. She was baptized at Tracy United Methodist Church. On February 5, 1950, Edith was united in marriage to Ruben Holstein at Tracy United Methodist Church. After the couple’s marriage, they lived on a farm northeast of Tracy in Springdale Township, Redwood County. To this union two daughters were born. Edith was a farm wife and mother and was employed as a school cook at Tracy Elementary School for eighteen years. The couple moved to Marshall upon their retirement in 1988. Edith then became a Taste Tester for Schwans Foods for nearly twenty years. She also served as an election judge. In 1991, she and her sister, Ruth both earned their GED’s. During her life, Edith and her sister Ruth enjoyed creating ceramics and together they attended many craft shows and seminars in Southwest MN and Sioux Falls, SD. Edith and Ruben also enjoyed trips to area casinos and attending their granddaughters’ sporting events. Edith passed away at Avera Morningside Heights Nursing Home on Monday, December 10, 2012. She had reached the age of 85 years, 8 months and 8 days. Edith is survived by her two daughters, Susan (and Elton) Goeman, of Jeffers and Sharon Johnson (and Howard Siegel) of San Diego, CA; two granddaughters, Erin Goeman and Crystal (and Charles) Simpson, all of Buffalo, NY; two great-granddaughters, Simona Tenorio and Molly Simpson, of Buffalo; and many other relatives. She was preceded in death by her husband, Ruben in November 2011; her parents; sister, Ruth Hendrickson Gunlogson; and nephew, Robert Hendrickson. Edith was a member of Wesley United Methodist Church at the time of her death. Blessed Be The Memory of Edith Holstein.

The family of Edith Irene Holstein created this Life Tributes page to make it easy to share your memories.

Edith Holstein, age 85, of Marshall, passed away at Avera Morningside...

Send flowers to the Holstein family.