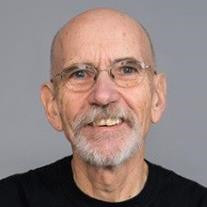 Edward Haag, age 68, of Marshall, Minnesota, died on Tuesday, August 28, 2018, at the Avera Regional Medical Center in Marshall. Funeral services are 2:00 p.m. Friday, August 31, 2018, at Grace Life Church in Marshall, Minnesota. Visitation will be held from 4:00 – 8:00 p.m. Thursday, August 30, 2018, at the Hamilton Fuenral Home in Marshall. A prayer service is scheduled for 7:00 p.m. Visitation will continue one hour prior to the service, from 1:00 – 2:00 p.m., on Friday at the church. Edward John Haag, Jr., was born on August 25, 1950, in St. Paul, Minnesota, to Edward Sr. and Fay Helen (Bassford) Haag. He grew up in St. Paul and was baptized, received first communion, and was confirmed in the Catholic faith. He graduated from Hill High School in 1968, attended Technical School, and then enrolled at Southwest State University in Marshall. On September 18, 1976, Ed was united in marriage to Linda Johnson at The Church On The Hill (before it was Grace Life Church) outside of Marshall. The couple made their home in Marshall and raised five children: Matthew, Rebekah, Ruthie, Rachel, and Gloria. He and Linda shared over 41 years of marriage together. Ed drove truck for Marshall Foods and then Reinhart Foodservice, totaling more than 40 years behind the wheel. Edward was a man of faith and conviction, recently celebrating his spiritual birthday. He was very involved in Grace Life Church, serving as a Deacon and long-time member and leader of the worship team. He had a true servant’s heart and would volunteer at various places where a need could be filled. Ed loved running – he entered any local 5K race and was involved in triathlons. He even participated in the Senior Olympics, held in Bloomington a few years ago. He loved time spent with his family and was involved in his kids’ dance productions and other activities. Edward Haag died following a tough battle with cancer on Tuesday, August 28, 2018, just 3 days after his 68th birthday. Blessed be his memory. He is survived by his loving wife, Linda Haag of Marshall; 5 children, Matthew (Elise) Haag of Olympia, WA, Rebekah Haag of Glenwood Springs, CO, Ruthie Haag of Sioux Falls, SD, Rachel Haag of Sioux Falls, SD, Gloria Haag of Russell; grandsons, Evander Haag and Keagen Haag; other relatives and many friends. Ed was preceded in death by his parents, Edward, Sr., and Fay Haag; and half-brother, Tom.

The family of Edward John Haag created this Life Tributes page to make it easy to share your memories.

Send flowers to the Haag family.