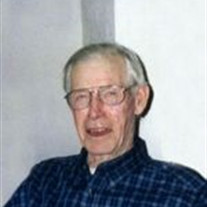 Edward F. Zvorak, age 88, formerly of Russell, passed away at the Golden Living Center in Olivia on Sunday, September 16, 2007. Funeral services will be 11:00 A.M. Wednesday, September 19, 2007 at the Grace First Parish in Russell. Burial will be in the Russell City Cemetery. Visitation will be 4:00 P.M. to 8:00 P.M. with a 7:30 P.M. prayer service Tuesday at the Hamilton Funeral Home. Visitation will continue at the church on Thursday, one hour prior to the service. Edward Fay Zvorak wase born to John and Jennie (Hallgren) Zvorak on January 11, 1919 in Russell, Minnesota. He was baptized and confirmed at Grace Lutheran Church in Russell, and graduated in 1939 from the Russell High School. After graduating, he worked on the railroad as a track inspector and section forman. In April 1940, Ed was united in marriage to Alta Pinckney and to this union six children were born, namely Lauren, Jack, Lowell “Butch”, Larry, Jeanne, and JoAnn. In 1944 Ed entered the military and served his country until honorably discharged in 1945. He then went back to work for the railroad. Ed and Alta were divorced in 1959. He later married Irene Beaver. He enjoyed fishing, hunting, bowling, trapping, horses, birdwatching, horse and dog racing, raising cattle, hogs and sheep and the Minnesota Twins. He was a member of the Veterans of Foreign Wars, Lions Club and Eagles Club. Ed passed away at the Golden Living Center in Olivia on Sunday, September 16, 2007. He had reached the age of 88 years, 8 months and 5 days. He is survived by his six children, Lauren (Phylllis) of Ellendale, ND, Jack (Marilyn) of Gladstone, MO, Lowell “Butch” (Sharon) of Buffalo, MN, Larry of Russell, Jeanne Modtland of Vesta, and JoAnne Wilson of Redwood Falls; 19 grandchildren: 37 great grandchildren; 3 great great grandchildren; a sister, Dorothy Sand of Russell; and many other relatives and friends. He was preceded in death by his wife, Irene; parents; and two brothers, Emery and Clarence. Blessed Be The Memory Of Ed Zvorak

Edward F. Zvorak, age 88, formerly of Russell, passed away at the Golden Living Center in Olivia on Sunday, September 16, 2007. Funeral services will be 11:00 A.M. Wednesday, September 19, 2007 at the Grace First Parish in Russell. Burial will... View Obituary & Service Information

The family of Edward Fay Zvorak created this Life Tributes page to make it easy to share your memories.

Edward F. Zvorak, age 88, formerly of Russell, passed away at...

Send flowers to the Zvorak family.