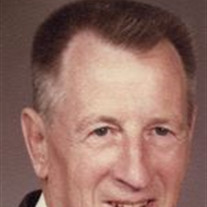 Einer V. Jensen, age 95, of Lynd, formerly of Tyler, passed away at his residence on Thursday, June 4, 2009. Memorial services will be 7:00 P.M. Tuesday, June 9, 2009 at the Hamilton Funeral Home. Visitation will be 5:00 P.M. until the time of the service on Tuesday. Burial will be in the Danebod Cemetery in Tyler. Einer Viggo Jensen was born to Christ P. and Jacobine (Sorenson) Jensen in Hope Township, Lincoln County, Minnesota on September 15, 1912. He was baptized and confirmed in the Lutheran faith at Danebod Lutheran Church in Tyler. He also attended school in Tyler. On June 3, 1933, Einer was united in marriage to Elna C. James at the Danebod Lutheran parsonage. They live in Tyler where Einer did carpentry work. On March 21, 1944, Einer entered the United States Navy. He was stationed at the San Diego base until he was honorably discharged on December 31, 1946. He returned to his family in Tyler and continued to do carpentry work. They moved to Marshall in 1956 and then to Lynd in 1959. Einer passed away at his residence on Thursday, June 4, 2009. He had reached the age of 95 years, 8 months and 19 days. He is survived by his three children, Vonnie (Jack) Doll of Las Vegas, Ronald (Carol) Jensen of Lynd, and Wade (Gerri) Jensen of Lynd; eleven grandchildren, Kerry, Kris, Skip, Kym, Kurt, Kent, Chad, and Jeremy Jensen, Shawna Christianson and Eric and Stacy DeMartelaere; ten great grandchildren; daughter-in-law, Kaye Jensen of Culver City, CA; nieces and nephews; also many other relatives and friends. He was preceded in death by his parents, wife, Elna in 1993; son, Dale; two infant sons, Leon and Gene; five brothers; and four sisters. Einer’s love of his life was his family and doing things with them and for them. Other enjoyments included, carving, camping, sightseeing, fishing (without a rod), watching parades and doing Find-A-Word puzzles. Blessed Be Einer’s Memory

The family of Einer V Jensen created this Life Tributes page to make it easy to share your memories.

Send flowers to the Jensen family.