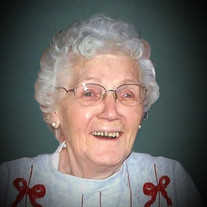 Elaine Irene Kronke, age 93, of Marshall, passed away Thursday, January 1, 2015, at Avera Morningside Heights Care Center in Marshall. Funeral services are Monday, January 5, 2015, 11:00 AM, at First Lutheran Church in Marshall. Following the luncheon, interment will be in St. Peter’s Evangelical Lutheran Cemetery in Balaton. Visitation will be held on Sunday, January 4, from 3:00 – 5:00 PM at the Hamilton Funeral Home in Marshall with a prayer service scheduled for 5:00 PM. Visitation will continue on Monday, one hour prior to the service, at the church. Clergy Officiating: Pastor Scott Fuller Pianist: Myra Kronke Special Music: Beth Wilson, Soloist ~ “The Lord’s Prayer,” “How Great Thou Art” Congregational Hymns: “What A Friend We Have In Jesus,” “Old Rugged Cross” Active Casket Bearers: Bob Wendorff, Darrel Wendorff, Jim Julien, Jon Kronke, Joe Silva, John Silva, Josh Elefant Honorary Casket Bearers: Gary Wendorff, Ron Wendorff, Rick Wendorff, Jon Wendorff, Nathan Julien, Bryce McCourt, Andrew McCourt, Don Lavoie, Kenneth Bump, Charlotte Grow, Elsie Paul, Marie Walters Elaine Irene Wendorff was born on May 10, 1921, at home in Ash Lake Township, Lincoln County, Minnesota. She was the daughter of Edward and Emma (Nottelman) Wendorff. Elaine was baptized as an infant and was confirmed in her youth in the Lutheran faith. She attended country schools and received a diploma from the elementary branches of Lyon County Public Schools in 1936 before helping her parents on the home farm and being hired by other farm families as a housekeeper. On September 5, 1942, Elaine was united in marriage to Arthur Kronke while he was stationed at Fort Lewis in Tacoma, Washington during WWII. With Arthur overseas, Elaine came back to Minnesota and worked in Minneapolis and Garvin. Reunited, the couple farmed near Amiret and Tyler before retiring from farming in 1949. They lived in Florence, Lynd, and Marshall. Elaine and Arthur were blessed with 4 children: Dennis, Diane, Dorene, and Darla. They shared over 46 years of marriage before Arthur passed away on Valentine’s Day, 1989. In the 1950s, Elaine worked as a cook at The Steakhouse in Marshall. In 1960, Elaine purchased the Valley Café in Browns Valley and operated it until 1963 when the restaurant burned. Elaine worked as a cook at the Browns Valley Public School until the family moved back to Marshall in 1964. Elaine managed the coffee shop in the Atlantic Hotel for 10 years until the building was condemned. She then worked as a cook at the Chalet, Club 59, and the Corner Bar. In 1979, Elaine moved to Lake Havasu City, Arizona, to be near her daughters Diane and Darla. While there, she worked as a cook at the Havasu Regional Medical Center. In 1987, Elaine moved back to Marshall and volunteered for Western Community Action. She was also an active volunteer for Weiner Memorial Auxiliary and Avera Hospital. She was a member of the Eagles, American Legion, and VFW Auxiliary groups. She was a faithful member of First Lutheran Church in Marshall. Her other enjoyments included sewing, crocheting, cutting hair, cooking, baking, dancing, and playing cards. Elaine Kronke died on New Year’s Day, 2015, in Marshall, Minnesota at the age of 93 years, 7 months and 22 days. Blessed be her memory. Elaine is survived by her children, Dennis (Myra) Kronke of Marshall, MN, Diane (Al) Silva of Jefferson City, TN, Dorene (Thomas) McCourt of Boston, MA, Darla (Gene) Elefant of Tucson, AZ; 12 grandchildren, Jodi, Jon, Jenny, Jana, Travis, Joseph, John, Jessica, Bryce, Andrew, Lacey, Josh; 20 great-grandchildren; 1 great-great-grandchild; nieces, nephews, other relatives and many friends. Elaine is preceded in death by her parents, Edward and Emma Wendorff; husband, Arthur Kronke; 4 brothers, Wilfred, Leonard, Gordon, and Lloyd Wendorff; 3 sisters, Lily Schuler, Fern Julien, and Marie Wendorff. Memorials are preferred to First Lutheran Church in Marshall, or to the Arthur J. and Elaine I. Kronke Scholarship (checks can be made out to SMSU Foundation or donations can be made online athttp://www.smsufoundation.org and click "Contribute Now"), or to a dementia-related cause of donor’s choice. The family invites everyone to the church basement following the service for a luncheon.

The family of Elaine Irene Kronke created this Life Tributes page to make it easy to share your memories.

Send flowers to the Kronke family.