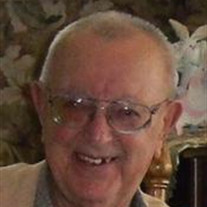 Marshall: Eldon A. McDaniel, age 91, of Marshall, passed away at Prairie Home Hospice House on Monday, May 21, 2012. Funeral services will be at St. Stephen Lutheran Church Friday, May 25, 2012 at 1:30 P.M.. Burial will be in the Marshall Cemetery. Military honors will be furnished by American Legion Post 113.Visitation will be Thursday 4:00 P.M. To 8:00 P.M. With a 7:00 P.M. prayer service at Hamilton Funeral Home. Visitation will continue at the church on Friday, one hour prior to the service. Eldon Arthur was born on July 10, 1920 in Lyon County to Samuel and Marie (Balle) McDaniel. He was baptized in the Christian faith and attended rural school near his parents homestead. Eldon was united in marriage to Julia M. Knutson on December 17, 1944 in Marshall. Eldon entered the United States Army on February 26, 1945 and served his country during the World War II. He was honorably discharged on August 6, 1946. After his discharge he returned to Marshall and was employed by Wilbur Osp Tire Shop, then was a route salesperson for Schwans and was employed by MN DOT until he retired 1984. Julia passed away on March 1, 2001 and Eldon joined her in death on May 21, 2012 at Prairie Home Hospice House in Marshall. He had reached the age of 91 years, 10 months and 11 days. He is survived by his daughter Judy (and Howard) McDermott of Grand Rapids, MN; a brother, Arnold McDaniel of Tracy; two sisters, Arlene Buchart of Aitkin, MN and Shirley Whitlock of Upland, CA; many nieces and nephew; also many other relatives and friends. He was preceded in death by his parents; wife, Julia; two sisters, Alice Reed and Yvonne Tanghe; four brothers, George, Marion, Irvin and Lowell McDaniel; two half brothers, Adrian and Orville; and two half-sisters, Bernice Peterson and Cleon Stewart. Eldon's enjoyments in life were fishing, deer and pheasant hunting, gardening, an insatiable sweet tooth, coffee with his friends, laughing and being involved with pranks. He was very frugal and nothing was wasted. At weekly breakfasts with his nephew Dean, a couple of napkins would find a way into his pockets. He also was thankful for the many holiday meals shared with him by Dean, Julie and their family. He was a faithful member of VFW Post 742 and American Legion Post 113 in Marshall. Eldon wanted to be and will be remembered as “Kind and the best person I could be.” Blessed be the memory of Eldon A. McDaniel.

Marshall: Eldon A. McDaniel, age 91, of Marshall, passed away at Prairie Home Hospice House on Monday, May 21, 2012. Funeral services will be at St. Stephen Lutheran Church Friday, May 25, 2012 at 1:30 P.M.. Burial will be in the Marshall Cemetery.... View Obituary & Service Information

The family of Eldon Arthur McDaniel created this Life Tributes page to make it easy to share your memories.

Marshall: Eldon A. McDaniel, age 91, of Marshall, passed away...

Send flowers to the McDaniel family.