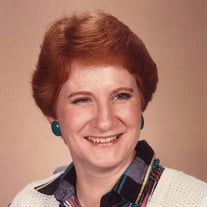 Ellen Marie Frahm was born on April 27, 1952 in Marshall, Minnesota. She was the daughter of Joseph and Susan Halbur (Voss). Ellen was baptized, received her First Holy Communion and Confirmed at Holy Redeemer Catholic Church in Marshall. Ellen graduated from Marshall Senior High School with the class of 1970. On February 17, 1972, Ellen was united in marriage to Jeff Frahm at Holy Redeemer Catholic Church in Marshall. The couple made their home in Worthington, Milroy and Marshall. Together, they raised two sons, Jason and Chad. They shared over forty-five years of marriage together. Ellen worked for CHS starting in 1975 spanning an almost forty- year career. Ellen was a member of a Basket-weaving Club and Card Club. Her hobbies included doing things at Lake Shetek, walking, sitting in the sun, reading, collecting recipes, fishing and time in Arizona. The loves of her life were her grandchildren Ellie and Colby. Ellen Frahm was called home to heaven on April 9, 2017, surrounded by her family at Sanford Medical Center in Sioux Falls, South Dakota at the age of 64 years, 11 months, and 13 days. She will be dearly missed. Ellen is survived by her husband, Jeff Frahm of Marshall; her two sons, Jason (Pam) Frahm of Vesta, Chad (Sandy) Frahm of Tyler; two grandchildren, Ellie and Colby; her seven siblings Evelyn (Gil) Regnier of Florida, Raymond (Mary) Halbur, Marshall, Lenny (Linda) Halbur, of Arizona, Donna (Rod) Enga of South Dakota, JoAnn Peterson of Lake Shetek, Sharon (Darcy) Klein of Milroy, Elaine (Tim) Meyer of Minneota. Ellen was preceded in death by her parents In lieu of flowers, memorials are preferred. The family invites attendees to a luncheon in the church fellowship hall, immediately following the service.

Ellen Marie Frahm was born on April 27, 1952 in Marshall, Minnesota. She was the daughter of Joseph and Susan Halbur (Voss). Ellen was baptized, received her First Holy Communion and Confirmed at Holy Redeemer Catholic Church in Marshall.... View Obituary & Service Information

The family of Ellen Marie Frahm created this Life Tributes page to make it easy to share your memories.

Send flowers to the Frahm family.