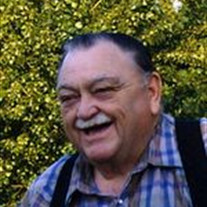 Elmer R. Denison, age 70, of Green Valley, passed away on Wednesday. December 19, 2007 as the result of vehicle accident in Marshall. Funeral arrangements scheduled for 10:00 AM on Thursday, December 27, 2007 at the Kingdom Hall of Jehovah’s Witnesses in Marshall. Elmer Robert Denison was born on the family farm to William and Francis (Smith) Denison on October 27, 1937 near White, South Dakota. He attended country school in White and went on to graduate from the Hendricks High School. He was baptized in dedication as one of Jehovah’s Witnesses at the age of nineteen. On October 17, 1964, Elmer was united in marriage to Darlene Plageman in Tracy, Minnesota. Elmer worked for various employers, was a mechanic at the rendering plant, drove for Duetz and Crowe, did blacksmithing, plumbing, over the road trucking for Jim Palmer Trucking, and most recently as a bus and taxi driver for Western Community Action in the Marshall area. Elmer loved to spend relaxing time on the back deck talking over life’s favorite memories and ventures with Darlene and his family members. Other enjoyments included tinkering and fabricating things in the garage, video taping his children and grandchildren, and drives up Lake Superior’s North Shore. He loved nature and looked forward to the day when the earth will become a paradise. Elmer passed away as the result of a vehicle accident in Marshall on Wednesday, December 19, 2007. He had reached the age of 70 years, 1 month and 22 days. He is survived by his wife, Darlene of Green Valley; four children, Will of Duluth, Crystal (and Arlyn) Tuynman of Sierra Leone, Africa, Wayne of St. Paul, and Matthew (and Maria) of St. Paul; three grandchildren, Tyler, Webster, and Dash; five siblings, William (and Verna) of Brookings, SD. Barbara (and Paul) Bieger of Perham, Joe of Estaline, SD, Phillip (and Valerie) of Watertown, SD, Judy Tirrel of Estaline, SD and Kathy Ward of Odessa, TX; also many nieces and nephews. He was preceded in death by his parents and three siblings, Agatha Morris, Theresa Morris, and Larry Denison. Elmer was a faithful member of the Kingdom Hall of Jehovah Witnesses at the time of his death. Blessed Be The Memory of Elmer Robert Denison

Elmer R. Denison, age 70, of Green Valley, passed away on Wednesday. December 19, 2007 as the result of vehicle accident in Marshall. Funeral arrangements scheduled for 10:00 AM on Thursday, December 27, 2007 at the Kingdom Hall of Jehovah&#8217;s... View Obituary & Service Information

The family of Elmer Robert Denison created this Life Tributes page to make it easy to share your memories.

Send flowers to the Denison family.