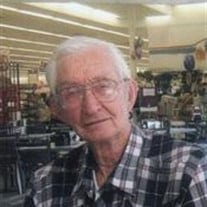 Elmer Grimes, age 98, of Marshall, passed away peacefully on Friday, March 15, 2013 at the Prairie Home Hospice in Marshall. Funeral services will be held on Tuesday, March 19, 2013 at 2:00 p.m. at Christ Presbyterian Church in Marshall. Burial will take place in the Russell Cemetery. Visitation will be held on Monday, March 18, 2013 from 5 to 7 p.m at the Hamilton Funeral Home and on Tuesday one hour prior to the service at the church. Elmer Arthur Grimes was born on October 23, 1914, on a farm in Lyon County, the third of four children to Henry and Sophia (Peterson) Grimes. Elmer lived a life rich with family and many friends. Elmer was proud of his farm upbringing and felt very fortunate to have gotten 12 years of education during a time when a lot friends only went to school thru 7th grade. He told stories of walking to and from school and then was very lucky to have a horse drawn school bus that he met and later on it was changed to a car with side curtains and finally a real school bus. When the winters were too cold he would ride his horse and meet the school bus, then let the horse loose and it would run home. Lunch was put in a half gallon syrup pail and carried to school. Elmer had many proud achievements in his life, one being a 4-H calf that earned him a trip to the Minnesota State Fair. This helped prepare him for many years of farming, raising livestock, showing and judging horse shows. After finishing school he stayed home and worked the farm with his father, then in 1936 he joined his brother, Clarence in a joint farming venture. They made the move to a better and bigger farm in Russell, MN, together they made some trades of horses and farm equipment to make ends meet. They also had feeder cattle and were very proud to own one of the first combines (Minneapolis Moline) and a 2 ton truck for hauling grain and livestock. In the early 1950’s he met his future wife, Mavis at a horse show, he thought he was a confirmed bachelor, but when he met Mavis he changed his mind. They were married on April 11, 1953 at the Methodist Church In Morton, MN. Together they enjoyed farming and showing a pair of matched palomino horses, raising their family, playing cards with their friends and traveling. Elmer was active in helping the 4-H clubs, serving on the township board for Ellsbourough Township in Murray County, and loved collecting and renovating antique tractors and engines. He also worked for Kimberly Clark purchasing flax straw. Elmer was an active member of the Masons, Scottish Rites, El Shrine and the Order of the Eastern Star. After retiring from farming and moving to Boulder Estates in Marshall, he took up bike riding and could be seen doing this almost every day the weather permitted. He will be remembered for his love of family ,work ethics, moral convictions, generosity, gentle nature and genuine kindness. Elmer is survived by his wife of 59 years, Mavis; daughter, Gail (Mike) Miller; son, John (Karen) Grimes; three grandchildren, Robert (Renee) Grimes, Jessica Ten Eyek (Spencer) and Amanda Grimes; five great-grandchildren, nieces, nephews, cousins and many dear friends. Memorials are preferred to Prairie Home Hospice. Blessed be the memory of Elmer Grimes.

Elmer Grimes, age 98, of Marshall, passed away peacefully on Friday, March 15, 2013 at the Prairie Home Hospice in Marshall. Funeral services will be held on Tuesday, March 19, 2013 at 2:00 p.m. at Christ Presbyterian Church in Marshall.... View Obituary & Service Information

The family of Elmer Arthur Grimes created this Life Tributes page to make it easy to share your memories.

Elmer Grimes, age 98, of Marshall, passed away peacefully on...

Send flowers to the Grimes family.