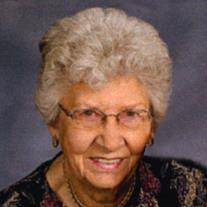 Eloise Anderson, age 91, of Wayzata and formerly of Marshall, Minnesota, passed away on Tuesday, September 26, 2017, at Hillcrest of Wayzata Healthcare Center. Funeral Services are 10:00 a.m. Monday, October 2, 2017, at Grace Church in Eden Prairie, Minnesota (Services to be held in the Chapel, enter door #2 – 9301 Eden Prairie Road, Eden Prairie, MN, 55347). Following a reception, interment will be the family plot in Our Savior’s Lutheran Cemetery in Milroy. Visitation will be held one hour prior to the service, from 9:00 – 10:00 a.m., Monday at the church. Clergy Officiating: Pastor Ian Riley Congregational Hymns: What a Day That Will Be / Old Rugged Cross / I’ll Fly Away Casket Bearers: Court Anderson, Lindsay Maddox, Jake Longworth, Nicholas Longworth, Sarah Riley, Rachel Kerzman Eloise Marjorie (Mitteness) Anderson was born July 25, 1926, in Benson, Minnesota, to Martin and Emma (Lyslo) Mitteness. She grew up on the family farm East of Benson and was later joined by her sister, Kathryn, and brother, Edward. Upon graduation from Benson High School, Eloise moved to Minneapolis where she was trained and then worked as a medical secretary. On February 15, 1947, Eloise was united in marriage to Roger Anderson. The couple made their home on Roger’s farm in Milroy, Minnesota. They raised their three children: James, Duane, and Lori. In 1974, both retired from farming and they moved to Lake Mary at Alexandria, Minnesota, where the couple made many close friends, just as they had in Milroy. They loved their life in the Scandinavian fisherman’s “paradise,” just as they loved their farm and friends in Milroy. In 1998, Eloise and Roger moved back to Marshall to be closer to family as they grew older. Again, they made many new friends, especially at the Redwood River Condos and then Boulder Estates. She and Roger shared an amazing 65 years of marriage together before Roger passed away in 2012. Eloise was taught as a young child by her parents and grandparents (immigrants from Norway) as well as other Godly teachers and preachers that the Bible comes from God and it is the authority on all spiritual matters. It tells us how we might gain eternal life in Heaven with God. Her family impressed upon her the value of reading, especially the Bible. Eloise was a life-long reader and, while young, gained great spiritual insights from the Godly teachings from others and her own exploration of the Word. She came to understand that when Jesus died on the cross, he paid the penalty for all her sins and that by believing and trusting in Jesus’ shed blood to cover her sins, she could gain eternal life in Heaven with her Savior. John 3:14-16. And she did so trust in Jesus to save her, as the Bible taught her. When Eloise could no longer read or do puzzles due to her strokes, she loved having short stories, Christian books, and Bible passages read to her. Eloise was a patient, kind, selfless person who never had a bad word to say about anyone or any situation and remained always optimistic. She taught her children the value of reading and the Bible. She had a Hurlbut’s Children’s Bible she always read to her family. Her children say that it was her teaching the truths of the Bible, her faithful prayers, and the Christian example from both parents that gave them the blessings that came into their lives. Her grandchildren all loved and cherished Eloise, as did many others. Eloise Anderson entered her heavenly home on Tuesday, September 26, 2017 at the age of 91 years, 2 months, and 1 day. Blessed be her memory. Eloise is survived by her 3 children, James (and Karen) Anderson of Minnetonka, Duane (and Gail) Anderson of Minneapolis, Lori (and Jeff) Longworth of Osage; 6 grandchildren, Court (and Jackie) Anderson, Lindsay (and J.R.) Maddox, Jake (and Heidi) Longworth, Nicholas (and Christina) Longworth, Sarah (and Ian) Riley, Rachel (and Nicholas) Kerzman; 8 great-grandchildren; brother, Edward (and Eveline) Mitteness of Hendricks; nieces, other relatives and many friends. Eloise is preceded in death by her parents, Martin and Emma Mitteness; and sister, Kathryn (and Jerry) Sullivan. In lieu of flowers, memorials preferred to charity of donor’s choice or the Grace Church Missions Fund.

The family of Eloise Marjorie Anderson created this Life Tributes page to make it easy to share your memories.

Eloise Anderson, age 91, of Wayzata and formerly of Marshall,...