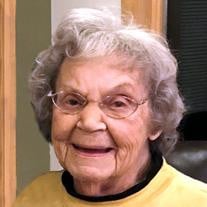 Elynor Bagstad, age 94, of Marshall, Minnesota, died peacefully at home on Thursday, March 21, 2019, with family by her side. Memorial Services are 11:00 a.m. Monday, March 25, 2019, at the Hamilton Funeral Home in Marshall, Minnesota. Following a light reception, interment will be in the Marshall Cemetery. Visitation will be held one hour prior to the service, from 10:00 – 11:00 a.m., on Monday at the Hamilton Funeral Home in Marshall. Elynor Genevieve Gilbertson was born on November 7, 1924, in Benson, Minnesota, to Syvert and Clara (Lien) Gilbertson. She grew up the youngest of 9 and was affectionately known as “Honey” her whole life. She was baptized and confirmed at Our Savior's Lutheran Church in Benson. She attended school in Benson, graduating with the class of 1942. On January 26, 1946, Honey was united in marriage to Lowell Bagstad in Benson. They raised two children and then in 1956, made their home in Marshall, Minnesota. Honey worked as a legal secretary at Quarnstrom and Doering Law Firm for over 31 years. Among Honey’s many skills were quilting (and Hardanger Embroidery) and baking many Norwegian treats. Her Christmas cookies and Krumkake will be missed by many. She was an avid lefse maker, spending the last several years running a lefse camp for her large extended family to make sure that skill was passed on. She was a loving wife, mother, grandmother, aunt, and friend to many. Elynor Bagstad died on March 21, 2019, in Marshall, Minnesota at the age of 94 years, 4 months, and 14 days. She was blessed to have her loving family at her side as she left this life. Blessed be her memory. Honey is survived by her husband of 73 years, Lowell Bagstad of Marshall; children, Roger (Cherie) Bagstad of Asbury, IA, Jane Bagstad (Terry Olson) of Wadena; grandchildren, Kristi Bagstad, Tim (Erica) Bagstad, Marney Olson (Kelly Armstrong); great-grandchildren, Clara and Nate Droessler and Theo Bagstad. Preceding her in death was her granddaughter, Johanna Olson.

The family of Elynor Genevieve Bagstad created this Life Tributes page to make it easy to share your memories.

Send flowers to the Bagstad family.