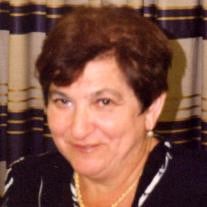 Emiliya was born in Slutzk, Soviet Union on October 14, 1939 to Naum Solovyov and Genya Solovyova-Sadovskaya. During World War II she and her mother escaped the Nazi occupation while her father, a military officer, was lost in action. During the war she was very sick and almost died from a kidney infection which contributed to her being on dialysis for the last seven years of her life. After the war, Emiliya’s mother remarried and they moved to Leningrad where Emiliya finished high school in 1957. Emiliya went on to college in Leningrad from which she graduated with a chemical engineering degree in 1961. While in college, she made a lot of friends who are now scattered all over the world and with whom she kept in touch through all the years and two immigrations. Emiliya met Evgeny in 1958 while in college and they were married in January of 1960. They lost their first child at birth in 1961 and their daughter, Nonna, was born in December of 1962. The life of a woman in the Soviet Union was not easy: no diapers, no washer or dryer, no frozen food, and a constant shortage of everything. Fortunately, Emiliya could sew and knit which helped a lot. Everybody admired her knitting skills and even later in America she put this knitting talent to use and took pleasure in knitting baby hats and booties. She was a great mother, taking Nonna to skating and swimming lessons and going on a vacation with Nonna every year. Her granddaughter Anna was born in 1983 and Emiliya took a month off work to help Nonna. When Emiliya’s mother was killed in a train accident, she and Evgeny moved in with her step-father and took care of him. Emiliya started working right after college as an engineer and worked in a chemical laboratory in an optical manufacturing plant until 1991 when she and Evgeny immigrated to Israel. She learned the language and adjusted well to the new life. However, they missed Nonna and her family especially after grandson Michael was born in 1998. In 2000, Evgeny and Emiliya moved to the United States and they became citizens in 2006. They again learned the new language and grew to love America and its people. But most importantly, Emiliya was able to spend time with her daughter, two grandchildren, and later her great-grandson, Xander, and recently born great-granddaughter, Tori. She was lucky to see her granddaughter graduate from college and law school and her grandson finish high school and start college. She attended Michael’s many concerts and saw her great-grandson read his first book and her great-granddaughter take her first steps even as she bravely battled so many health issues. Emiliya will always be remembered as a good friend, wonderful wife, great mother, and a very caring grandmother and great-grandmother. Emiliya died on Tuesday, April 18, 2017, at the age of 77 years, 6 months and 4 days. Blessed be her memory. Emilyia is survived by her daughter, Nonna (Ilya) Gutman of Marshall; grandchildren, Anna (Craig) Fisher of Mankato, Michael Gutman of Marshall; great-grandchildren, Alexander and Victoria Fisher; other relatives and many friends. She was preceded in death by her parents; husband, Evgeny Nekrich; Step-sister, Galina Katz; and step-brother, Zinovy Taubin.

Emiliya was born in Slutzk, Soviet Union on October 14, 1939 to Naum Solovyov and Genya Solovyova-Sadovskaya. During World War II she and her mother escaped the Nazi occupation while her father, a military officer, was lost in action. During... View Obituary & Service Information

The family of Emiliya Nekrich created this Life Tributes page to make it easy to share your memories.

Send flowers to the Nekrich family.