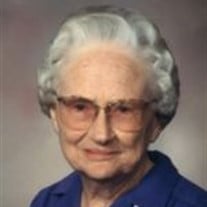 Emma Miller, age 97, of Marshall died on Monday, March 17, 2008 at the Granite Falls Municipal Hospital. Funeral services are planned for 2:00 PM on Saturday, March 22 at the Hamilton Funeral Home in Marshall. Visitation will be with the family, one hour prior to the service at the Hamilton Funeral Home. Emma was born in Boone, Iowa on February 15, 1911. She moved with her family to Lyon County in 1918 where she attended school in Clifton Township, District 28. In 1935, Emma was united in marriage to Donald Miller and they lived on a farm near Marietta, MN for a short time. In 1938, Emma returned to Marshall to live with her family. She worked as a seamstress at the Marshall (Carrow’s) Dry Cleaners for 34 years until her retirement. She also did alterations in her home for local men’s clothing stores Mr. Cool’s, Wagoner & Habicht, and Olson & Lowe. Emma never fully recovered from the loss of her sister, Ruth, in 1995. She was a long time member of the Albright Methodist Church in Marshall. Emma passed away on March 17, 2008. She reached the age of 97 years, 1 month, and 2 days. She is survived by her son, Gerald (and Kay) Miller of Malmo, MN; 3 grandchildren, Paul and Tina) Miller of Ramsey, Lynn (and Carl) Hoang of Maple Grove, and Jon (and Desi) Miller of Sartell; 6 great-grandchildren, Alisa, Melanie, Lucas, Destinee, Sara, and Alex; several nieces and nephews; and many other relatives and friends. She was preceded in death by her parents, Alfred and Bertha (Brucker) Miller; 4 brothers, Otto, Elmer, Albert, and Walter; and 2 sisters, Ruth and Mayme. Blessed Be The Memory of Emma Miller

Emma Miller, age 97, of Marshall died on Monday, March 17, 2008 at the Granite Falls Municipal Hospital. Funeral services are planned for 2:00 PM on Saturday, March 22 at the Hamilton Funeral Home in Marshall. Visitation will be with the family,... View Obituary & Service Information

The family of Emma Miller created this Life Tributes page to make it easy to share your memories.