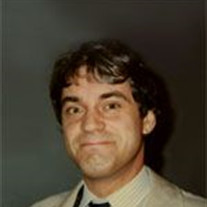 Plymouth: Eric Chambers, age 57, husband of Caroline (Schrunk formerly of Lynd) Chambers passed away at the North Memorial Medical Center Hospice in Robbinsdale, on Friday, June 25, 2010. Funeral services will be 2:00 P.M. Tuesday, June 29, 2010 at the Hamilton Funeral Home. Burial will be in the Lynd City Cemetery. Visitation will be 6:00 P.M. to 8:00 P.M. with a 7:00 P.M. prayer service Monday at the funeral home. Visitation will continue at the funeral home on Tuesday, one hour prior to the service. Eric Marc Edward Chambers was born on January 13, 1953 in Paris, 17th Arrondissment, France to Yves and Christiane (Bombaron) Chambers. Eric grew up in LeVallois, France and attended high school and La Dauphine College in Paris. He worked for many years at Thomson and ITEP companies. Eric’s son, Marc-Edward was born in 1983. Eric and Caroline Schrunk were married on August 3, 1990. They have three daughters, Barbara Mae, Marie-Christianne Esther and Elena Jane. Eric’s grandson, Elliott John was born July 3, 2008. Eric was a father-at-home as the family moved to Belgium and back to the United States. His hobbies included computers, movies and toy trains. Eric’s tremendous sense of humor and loving caring ways will be greatly missed by his family and friends. Eric passed away at the North Memorial Medical Center Hospice in Robbinsdale on Friday, June 25, 2010. He had reached the age of 57 years, 5 months and 12 days. He is survived by his wife, Caroline, of Plymouth; four children; grandson; sisters, Muriel and Ann Chambers, who both live in France; and extended family, Robert and Esther Schrunk of Marshall, Robert and Oksana Schrunk family, of Truman, Andrew and Jennifer Muser family, of North Carolina, and Aaron and Susan Krenz family, of Truman. He was preceded in death by his parents, Yves and Christiane. Blessed Be The Memory Of Eric Marc Edward Chambers Please Designate Memorial to the Cystic Fibrosis Foundation

The family of Eric Marc Edward Chambers created this Life Tributes page to make it easy to share your memories.