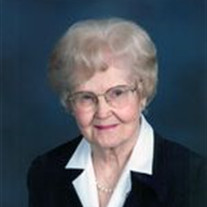 Eris I. Rund, age 86, of Marshall, passed away at the Avera McKennen Hospital on Sunday, January 25, 2009. Funeral services will be 10:00 A.M. Friday, January 30, 2009 at St. Stephen Lutheran Church. Burial will be in the New Hope Cemetery in Hayti, SD. Visitation will be from 4:00 to 7:00 P.M. Thursday at the Hamilton Funeral Home. Visitation will continue at the church on Friday, one hour prior to the service. Eris Johnson was born on November 14, 1922 to Hilmar and Josie (Iverson) Johnson in Hamlin County, South Dakota. She was baptized and confirmed at New Hope Lutheran Church in rural Hayti, SD. She attended Hayti High School and furthered her education at Augustana Normal in Sioux Falls, South Dakota, and Black Hills Teachers College in Spearfish, South Dakota. After completing school, Eris taught in Hazel, Pierre, and Opdahl #1, SD. On December 19, 1947, Eris married “the boy next door,” Elroy Rund at the Hatyi Lutheran Parsonage. They Farmed in South Dakota until May of 1955 when they moved to Marshall, Minnesota. Eris worked for 23 ½ years at the Woolworth Department store in Marshall. Eris and Elroy were charter members of St. Stephen Lutheran Church in Marshall. Throughout their lives, they were active members at New Hope Lutheran Church in Hayti, SD, and St. Stephen Lutheran Church in Marshall. Eris and Elroy enjoyed traveling to different countries and various locations throughout the United States. They also enjoyed spending the cold Minnesota winters in Texas. Eris sang in the choir, quilted and attended Priscilla Circle. She enjoyed reading, going out for coffee with family and friends, and loved caring after her flower gardens. At Boulder Estates, she participated in Bible study and story hour. Eris loved spending time with “the little ones” and it always put a smile on her face. Eris passed away on January 25, 2009 at Avera McKennen Hospital in Sioux Falls at the age of 86 years, 2 months, and 11 days. She is survived by her sister, Harriet Buckman of Wheaton, MN; brother, Elliot Johnson of San Antonio, TX; and several nieces and nephews. She is lovingly remembered by an extended family and her dearest friends in Marshall: the Polman family, Dorraine Fawcett, Leona Hefti, and Jeanne Alex. Eris was preceded in death by her husband, Elroy; infant daughter and infant son; parents; two brothers; and a sister. Eris’ kind and loving personality will be missed by all the lives she touched. Blessed be her memory.

Eris I. Rund, age 86, of Marshall, passed away at the Avera McKennen Hospital on Sunday, January 25, 2009. Funeral services will be 10:00 A.M. Friday, January 30, 2009 at St. Stephen Lutheran Church. Burial will be in the New Hope Cemetery in... View Obituary & Service Information

The family of Eris Ione Rund created this Life Tributes page to make it easy to share your memories.

Eris I. Rund, age 86, of Marshall, passed away at the Avera McKennen...