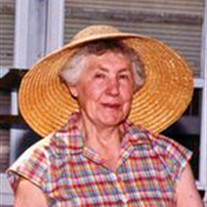 Marshall: Erma Christenson, age 97, of Marshall, passed away Monday, August 3, 2009 at Morningside Heights Care Center in Marshall. Funeral services will be 10:30 A.M. Friday, August 7, 2009 at Holy Redeemer Catholic Church in Marshall. Visitation will be held on Thursday evening, August 6, from 5 to 7 P.M. with a prayer service at 7:00 at the Hamilton Funeral Home. Burial will be in the St. Clotilde Catholic Cemetery following the lunch. Visitation will continue one hour prior to the service on Friday, at the church. Erma Marie Blomme was born to Joseph and Marie (Crumback) Blomme on November 17, 1911 in Marshall, Minnesota. She was baptized, confirmed and received first communion at St. Clotilde’s Catholic Church in Green Valley. She attended Green Valley country school. After moving off the farm into Marshall, Erma worked for Grues Bakery and Coast To Coast. On August 16, 1941, Erma was united in marriage to James Christenson at St. Clotilde’s Catholic Church in Green Valley. James passed away in 1960. On December 10, 1966, Erma married Joseph Larson at Holy Redeemer Catholic Church in Marshall. Erma worked for over 13 years with Schwans, retiring in 1987 at the age of 73 to care for her great-grandchildren. Joseph passed away in 1995. Erma was really a jack-of-all-trades. She loved sewing, baking her famous Belgian Cookies, watching her great-grandchildren, going to rummage sales, auctions, and spending time with family. Erma always had the coffee pot hot and cookies ready. She was also a proud quilter for the church and a member of the woodworking club. Erma died on Monday, August 3, 2009 at the age of 97 years, 8 months and 17 days. She is survived by daughter, June Carter of Marshall; grandchildren, Jim (and Gerri) Carter of Marshall and Mike (and Sherry) Carter of Marshall; great-grandchildren, Diane, Josh, and Katie Carter of Marshall; sister, Martha Francis of San Diego, CA; and step-children, Gene Larson of Montevideo, Gerry Enstad of Granite Falls, Joyce Fjerkenstad of Dawson, Arlys Johnson of Granite, and Janice Harman of Concord, CA; and many other relatives and friends. Erma was preceded in death by her parents, Joseph and Marie; husbands, James Christenson and Joseph Larson; great-granddaughter, Kelli Carter; Son-in-law, Carl Carter; step-son, Gary Larson; and brothers Maurice Blomme, Henry Blomme, and Gerald Blomme and sister Bertha Mabry . Blessed be the memory of Erma Christenson

The family of Erma Marie Christenson created this Life Tributes page to make it easy to share your memories.

Send flowers to the Christenson family.