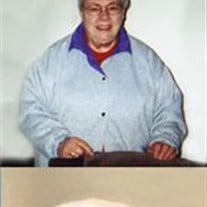 Esther "Tootie" Fox, age 73, of Marshall, died on Saturday, July 14, 2007 at the Hospice House in Marshall. Funeral Services will be 11:00 A.M. Wednesday, July 18, 2007 at St. Edward's Catholic Church in Minneota. Burial will be in the St. Edward's Catholic Cemetery. Visitation will be Tuesday, July 17, 2007 from 4:00 to 8:00 P.M. at the Hamilton Funeral Home in Marshall. Visitation will continue at the church on Wednesday, one hour prior to the service. Esther Marie was born March 10, 1934 in Marshall, Minnesota to Lynn and Bernice (Rode) Culbertson. Esther was brought up in the Christian faith. In her youth, she attended Marshall grade school and then attended Marshall High School. She worked at Swift's, the hospital, and many cafes and was a member of the VFW Auxiliary. Esther always took care of siblings and others growing up. She was united in marriage to Lloyd Fox on July 29, 1961 at St. Mary's Chapel in Marshall. She was a homemaker for many years and then she volunteered at the Senior Center in Minneota where she was also a member. Esther enjoyed decorating, collecting frogs, baking, crocheting, red roses, and taking care of people. She also enjoyed spending time with family and friends. Esther passed away July 14, 2007, under hospice care after a long battle with cancer. She reached the age of 73 years, 4 months, and 4 days. She is survived by her children, Julie (and Don) Calvin of Marshall, Scott Fox of Minneota, and Corey Fox of Marshall; grandchildren, Nicole Calvin of Fargo and Matthew Calvin of Marshall; siblings, Loretta Kvistad of Woodbury, MN, Richard (and Rose) Culbertson of Randall, MN, Carolyn (and Gene) Wheeler of Globe, AZ, Marilyn Windey of Minneota, Roger (and Mary Lee) Nelson of Willmar, and Linda Nelson of Montevideo; aunts and uncles, Leona (and Harold) Peterson of Russell and Melvin (and Reva) Rode of Arco; many brothers- and sisters-in-law; and many nieces and nephews. She was preceded in death by her parents; husband, Lloyd in 1993; and brothers, Donald Culbertson and George Nelson. Blessed Be Her Memory

The family of Esther "Tootie" Fox created this Life Tributes page to make it easy to share your memories.

Send flowers to the "Tootie" family.