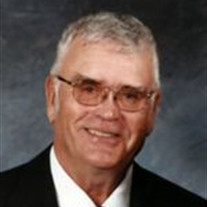 Eugene Vandeputte, age 77, of rural Marshall, passed away suddenly at his residence on Friday, March 20, 2009. Funeral services will be at 3:00pm Tuesday, March 24 at the Albright United Methodist Church, with the burial following at the Marshall Cemetery. Visitation will be 4:00-8:00pm with a 7:00pm prayer service Monday at the Hamilton Funeral Home. Visitation will continue at the church on Tuesday, one hour prior to the service. Eugene (Gene) Harold Vandeputte was born to Florent and Laura (Weidauer) Vandeputte on November 7, 1931 in Marshall, Minnesota. He was baptized and confirmed at the E.U.B. (Albright United Methodist Church) and graduated from Marshall High School. He entered the United States Army on August 21, 1952 and served his country until he was honorably discharged on July 31, 1960. On February 2, 1957 Gene was united in marriage to Donna Paradis at the E.U.B. church. They made their home in Clifton Township where they farmed. Gene also drove truck for Floyd Wild and worked at Southwest State University for 27 years, retiring in 1996. After retirement he farmed with his son Mark and worked at Hardees doing maintenance. Gene passed away at his residence on Friday, March 20, 2009. He had reached the age of 77 years, 4 months and 13 days. He is survived by his wife, Donna of Marshall; four children, Dawn (Dennis) Boerboom of Marshall, Jody (Chad) Niesen of Onamia, Mark (Rita) Vandeputte of Marshall and Scott (Rae Ann) Vandeputte of Minneapolis; seven grandchildren, Brent Boerboom, Eric Boerboom, Alyssa Vandeputte, Karli Vandeputte, Chase Niesen, Paradis Vandeputte and Annelies Vandeputte; two sisters, Lillian (Roy) Truax of Forest Lake and Sylvia (John) Clark of Rochester; sister-in-law, Doris Vandeputte of Pipestone; and many relatives and friends. He was preceded in death by his parents; his son, Jeff; and his brother, Hubert. Gene’s wife and family were the love of his life; spending time with them at the farm, the lake or cheering at their sporting events. He was always available to lend a helping hand where needed and was a faithful member of his church where he ushered and was a Trustee. Farming was always a big part of his life; even after retirement you could find him fixing, tinkering and wood-working around the farm, enjoying morning coffee with friends, sharing a joke or two and doing maintenance work at Hardees always brought a smile to his face. Blessed be the memory of Gene Vandeputte

Eugene Vandeputte, age 77, of rural Marshall, passed away suddenly at his residence on Friday, March 20, 2009. Funeral services will be at 3:00pm Tuesday, March 24 at the Albright United Methodist Church, with the burial following at the Marshall... View Obituary & Service Information

The family of Eugene Vandeputte created this Life Tributes page to make it easy to share your memories.

Send flowers to the Vandeputte family.