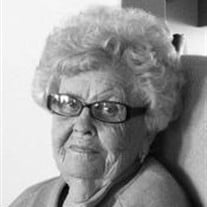 Marshall: Eunice Forbes, age 93 of Marshall, passed away at the Northfield Hospital on Tuesday, April 12, 2011. Funeral services will be 1:00 P.M. Saturday, April 16th at the Wesley United Methodist Church in Marshall. Burial will be in the Marshall Cemetery. Visitation will be 5:00 P.M. to 8:00 P.M. Friday at the Hamilton Funeral Home. Visitation will continue at the church on Saturday, one hour prior the service. Funeral services celebrating her life will be held at 1:00 p.m. on Saturday, April 16, 2011 at Wesley United Methodist Church in Marshall, MN. Burial will follow at Marshall Cemetery. Friends may call from 5:00-8:00 p.m., Friday, April 15, 2011 at Hamilton Funeral Home in Marshall, MN, and one hour prior to services at the church. Eunice Aðalbjörg Isfeld was born on September 23, 1917 in Lincoln County, Minnesota, the eldest child of S. E. and Albertina (Gudmundson) Isfeld. She attended country school in Lincoln County and graduated from Ivanhoe High School in 1936. She completed her teachers training from the Ivanhoe High School Teachers Training Department in 1937 and went on to teach country school for two years in Lyon County. While teaching, she met and later married David Dunn Forbes at the Icelandic Lutheran Church in Lincoln County on June 20, 1939. She was a devoted farm wife and mother to their five children. After the death of David in 1986, she continued to live on the family farm for 18 more years before moving to Marshall to be closer to her friends. She was an active member of the United Methodist Church, UMW Circles, and G of K Book Club. She enjoyed playing cards and other games with her friends and grandchildren. Most every week, she would take pleasure in the company of her friends at breakfast gatherings. Eunice was a woman of strong faith, family and love. Among her greatest enjoyments, was to spend time with her family, including many grandchildren and great-grandchildren. She was proud of her Icelandic heritage and loved to travel and visit with her many friends. She enjoyed flower gardening, bird watching, and telling the many stories of her life. She was a great treasure and will always be loved and cherished by those that knew her. Eunice A. Forbes, 93, passed away peacefully with many of those she loved beside her on the evening of Tuesday, April 12, 2011 at Northfield Hospital in Northfield, Minnesota. She reached the age of 93 year, 6 months and 19 days. She is survived by two siblings, Joyce Isfeld of Canby, MN, and S. Eugene Isfeld of Madison, MN; her five children, David (Marilyn) Forbes and Alan (Colleen) Forbes, both of Marshall, MN, John (Emmy) Forbes of Allerton, Iowa, Kathryn Lunder of Northfield, MN, and Gregory (Linda) Forbes of Chatfield, MN; 12 grandchildren, Clay, Jason, Juston, Brett, Krissy, Sara, Heidi, Wendy, Nathan, Gretchen, Ryan, and Clint; and 15 great-grandchildren. She was preceded in death by her husband, David, of 47 years; her parents; two sisters, Arloine Wrolson and Ruth Isfeld; and son-in-law, Lloyd Lunder. Blessed be the memory of Eunice Forbes.

Marshall: Eunice Forbes, age 93 of Marshall, passed away at the Northfield Hospital on Tuesday, April 12, 2011. Funeral services will be 1:00 P.M. Saturday, April 16th at the Wesley United Methodist Church in Marshall. Burial will be in the... View Obituary & Service Information

The family of Eunice Forbes created this Life Tributes page to make it easy to share your memories.

Marshall: Eunice Forbes, age 93 of Marshall, passed away at the...

Send flowers to the Forbes family.