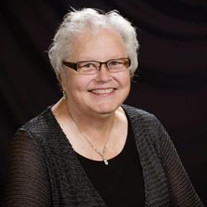 Marshall: Eunice E. Hanson, age 70, of Marshall, passed away suddenly at Avera Marshall Regional Medical Center on Wednesday, April 16, 2014. Funeral services will be 11:00 A.M. Monday, April 21st at First Lutheran Church in Marshall. Visitation will be 6:00 P.M. to 8:00 P.M. with a 7:00 P.M. prayer service Sunday at the Hamilton Funeral Home and one hour prior to the service at the church. Burial will be in the Marshall Cemetery.Eunice Elaine was born on February 6, 1944 in Appleton, Minnesota to Martin and Leona (Bartz) Schwarz. She was baptized and confirmed in the Lutheran faith. Eunice graduated from the Appleton High School in 1962.Eunice was united in marriage to Harold John Hanson on May 4, 1963 at the Sible Lutheran Church in Appleton. To this union two children were born, namely; Wendell and Monica. Eunice was a homemaker, mother and also cooked at the Marshall Public School, Marshall Area Adult Center and Boulder Estates. Harold passed away in 2010 and Eunice retired shortly after.The love of Eunice’s life was doing things with and for her family, especially for her grandchildren and great grandchildren. Her enjoyments included scrap booking, making greeting cards and baking.She is survived by her daughter, Monica (Doug) Nawrocki of Marshall; grandchildren, Jessica (Dustin) McCune of DeSmet, SD, Zachery (Lorrissa) Sorenson of Marshall, and Emily (Jacob) Maras of Crooks, SD; great grandchildren, Ethan, Jacie, Charli and Bristol McCune of DeSmet, and Ezra Maras of Crooks, SD; siblings, Elaine (Warren) Rau, Marlow (Ardis) Schwartz, Harvey (Gwen) Schwarz and Norman (Marlys) Schwarz all of Appleton; sister-in-law, Arlene Schwarz of Hutchinson; also many other relatives and friends.She was preceded in death by her husband, Harold: son, Wendell; and brother, Warren.Eunice was a faithful member First Lutheran Church at the time of her death.Blessed be the memory of Eunice E. Hanson.Please designate memorials to Prairie Home Hospice.

The family of Eunice Elaine Hanson created this Life Tributes page to make it easy to share your memories.