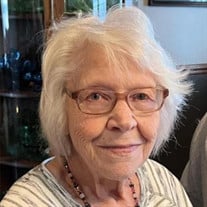 Eunice Steyer, age 92, of Marshall, Minnesota, died peacefully under the care of hospice on Wednesday, March 16, 2022, at her home. A private graveside service is planned for a later date. Interment will be in the Bowman Cemetery, Bowman, North Dakota. “God make my life a little flower, that giveth joy to all, content to bloom in native bower although its place be small.” (Matilda Barbara Betham-Edwards) Eunice Anna Stevens was born December 14, 1929, to Charles and Laurane (Krenz) Stevens in Slope County, near Reeder, North Dakota. She graduated from Hettinger High School in 1948. Later that year she was married to Orville Steyer in Bowman, North Dakota, on November 6th. The couple moved to the Steyer Ranch and Farm and later bought their own farm outside of Bowman. There they raised their four children: Charlene, Marla, Ronna, and Loren. In 1989 the couple moved into town and then in 1997 they moved to Dickinson, North Dakota. Eunice was a dedicated homemaker, wife, mother and grandmother and she loved to bake, sew, crochet, do embroidery, and quilt. Many people were blessed by her talents over the years, and she was always ready to lend a helping hand to those in need. She was happiest when all of her family was around her and especially enjoyed providing them with more cookies than they could ever eat. Eunice had a special fondness for her dog, King, and cats, Taz and Buffy. She naturally also helped out around the farm and assisted Orville with hauling grain, chasing cows, and caring for their horses. Eunice also spent time working at the kitchen at Saint Luke's Nursing Home for many years. She worked in Bowman at Gary's Jack and Jill and later spent time as a baker at the North Donut Hole before officially retiring in October of 2000. Eunice was a charter member of the Scranton and Bowman Assembly of God Church and was very active there, teaching Sunday School for many years. Eunice Steyer died on Wednesday, March 16, 2022, surrounded by her family at her home in Marshall, Minnesota. She had reached the age of 92 years, three months, and two days. Blessed be her memory. She is survived by her 4 children, Charleen (Keith) Kalina of Mesa, AZ, Marla Meggers (Tracy Schumacher) of Scranton, ND, Ronna Hansonl (Roger Wickstrom) of Marshall, Loren (Donna) Steyer of Beaver Lodge, Alberta, Canada; 9 grandchildren, Aaron (Rebecca) Meggers, Adam Meggers, Jessica (Terry) Schulte, Crystal Johnson, Mike Robertson, Cody Steyer, Joslyn Steyer, Molly Steyer, Noah Steyer; 7 great-grandchildren; sister, Sharon (Bob) Hall of Northfield; brother, Bill (June) Stevens of Stanley, ND; nieces, nephews, other relatives and many friends. Eunice was preceded in death by her parents, Charles and Laurane Stevens; husband, Orville Steyer; son-in-law, Bob Hansonl; sister, Marcela Senn; and many wonderful friends.

Eunice Steyer, age 92, of Marshall, Minnesota, died peacefully under the care of hospice on Wednesday, March 16, 2022, at her home. A private graveside service is planned for a later date. Interment will be in the Bowman Cemetery, Bowman, North... View Obituary & Service Information

The family of Eunice Anna Steyer created this Life Tributes page to make it easy to share your memories.

Send flowers to the Steyer family.