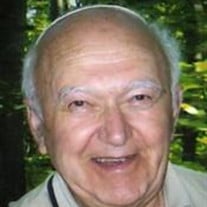 Marshall: Evgeny Nekrich, age 77, of Marshall, passed away Sunday, March 10, 2013 at the Avera Morningside Heights. Funeral services will be 3:30 P.M. Tuesday, March 12th at the Hamilton Funeral Home. Visitation will be one hour prior to the service. Burial will be in the Marshall Cemetery. Evgeny was born in Leningrad, Russia on February 23, 1936 to Haim Nekrich and Gilda (Romm) Nekrich. During WWII he escaped Leningrad Blockade together with his mother and was evacuated to Ural Mountains. His dad meanwhile died during blockade. After the war, Evgeny and his mother returned to Leningrad where he finished high school in 1954. Life was not easy and required constant struggle to survive. After school, Evgeny went on to college in Leningrad which he graduated from with a mechanical engineering degree in 1959. He made a lot of friends there who are now scattered all over the world and with whom he kept friendship through all the years and two immigrations. Evgeny met Emiliya in 1958 at his college and they got married in January 1960; their daughter Nonna was born in December of 1962. Evgeny was a great family man. He took vacations with Nonna every year and taught her skating and swimming and encouraged her to write poems. She remembers doing home repairs with him and even building a garage. His granddaughter Anna was born in 1983 and he took a month off work to help Nonna and enjoyed spending time with his granddaughter ever since. Evgeny started working right after college as an engineer and later became project manager. He worked until 1991 when he and his wife immigrated to Israel. He loved that country, learned the language, and adjusted well to the new life working at the military base. However, he was missing Nonna and her family especially after grandson Michael was born in 1998. In 2000, Evgeny and Emiliya moved to the US where they became citizens in 2006. He grew to love America and its people; he learned the new language and worked at Hy-Vee at the same time volunteering to teach Hebrew. But most importantly, he was spending time with his daughter, two grandchildren, and his recently born great-grandson, Xander. He was lucky to see his granddaughter graduate from college and graduate school, walk with his grandson the streets of Marshall and attend his many concerts, and see his great-grandson say first words and take first steps even as he bravely battled his leukemia the last ten years. Evgeny Nekrich died shortly after celebrating his 77th birthday with all his family as he always wanted to. His is survived by his wife, Emiliya, of Marshall; daughter, Nonna (and Ilya) Gutman, of Marshall; two grandchildren, Anna (and Craig) Fisher, of Mankato and Michael Gutman, of Marshall; and great-grandson, Xander. He was preceded in death by his parents. Evgeny will always be remembered as a good friend, wonderful husband, great dad, and very caring grandfather. Blessed be the memory of Evgeny Nekrich.

Marshall: Evgeny Nekrich, age 77, of Marshall, passed away Sunday, March 10, 2013 at the Avera Morningside Heights. Funeral services will be 3:30 P.M. Tuesday, March 12th at the Hamilton Funeral Home. Visitation will be one hour prior to the... View Obituary & Service Information

The family of Evgeny Nekrich created this Life Tributes page to make it easy to share your memories.

Send flowers to the Nekrich family.