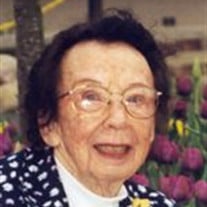 Marshall: Fern Harris, age 89, died peacefully on January 3, 2008 at Prairie Home Hospice House in Marshall with family and friends. A Memorial Service wlll be at 1:30 PM on Saturday, January 12, 2008, at Christ Presbyterian Church in Marshall. Burial will be at a later date. Fern Eva McNab Harris was born April 22, 1918 near Black River Falls, Wisconsin, and died January 3, 2008 in Marshall, Minnesota. She was the third daughter of Alex and Edith McNab. After graduation from high school she took comptometer training and went to work in St. Paul. She met and married Lyle Harris there just as he was joining the army as an officer in May 1943. They were stationed at Ft. Riley, KS where daughter Jean was born. After the war the family moved back to St. Paul and Lyle resumed his job at the Dept. of Taxation. Son Frank was born in St. Paul. In 1949 the family moved to rural Lynd, MN to farm and in 1961 they moved back to St. Paul as Lyle was appointed deputy to the State Treasurer. At retirement in 1973 Lyle and Fern began to renovate the James Harris home farm west of Marshall where they lived during the summers, and they took residence in McAllen, Texas during the winters. Fern’s interests and activities were many. She worked as comptometer operator, stenographer, and farm manager, and volunteered at Midway Hospital in St. Paul and in the McAllen public schools. She was a member of Christ United Presbyterian Church in Marshall and of other churches wherever she lived. She loved entertaining friends, cooking and sewing, bridge, golf, traveling, reading, letter writing, flower arranging and many other hobbies, but her most enduring passion was gardening. She dearly loved and greatly supported her grandchildren Joy and Stephen, and step-grandchildren Joshua and Jennifer, and great-grandchildren Brennen and Alyssa. Her goal was to be efficient and effective and her motto, “Friends are our most valued possession.” Fern left a legacy of dependability and thoughtfulness for her family and multitude of friends.

The family of Fern Eva Harris created this Life Tributes page to make it easy to share your memories.

Send flowers to the Harris family.