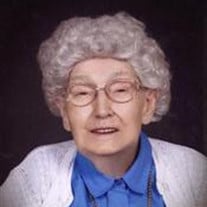 A Memorial service for Florence Blowers, age 93, of Marshall will be held at Christ Evangelical Lutheran Church of Marshall on Saturday, March 26th, 2011 at 2:00. She passed away on Monday, March 21, 2011 at the Minneota Manor. In Florence’s words, she has begun the “biggest adventure of her life”. Florence Kerstine Sorensen, the daughter of Harry and Ellen (Lindell) Sorensen was born on October 16, 1917 in Martin County, MN. She was baptized on April 14, 1918 at the Imannual Evangelical Lutheran Church in Fairmont. Florence was confirmed and received her first communion from the Rev. Beck in Fairmont. On March 26, 1941 she was united in marriage to John R. Blowers in Fairmont. After marriage, they lived on a farm by Dunnell, MN. While there, Florence was very involved in the church and community, including volunteer work at a nursing home doing crafts with the residents. Florence was “Mother of the Year” in 1959. She was always helping everyone she could in any way she could. Later they moved to the Doris Duke Estate in New Jersey where she ran a nursing home craft shop. Florence and John moved to Marshall in the early 1970’s where Florence was very active in the community. She volunteered at the nursing home and did many crafts from her home. Her home was always filled with grandchildren and children from the neighborhood. Florence was known for creating the penny carnival, leading Campfire girls, and her homemade ice cream and brownies. Florence was always willing to lend a helping hand, whether she was donating craft items to Hospice, driving people to the grocery store, or delivering Meals on Wheels. She liked people, big and small and always made time for everyone she met. She was a member of Christ Evangelical Lutheran Church in Marshall. She was very active in several church groups including Ladies Aide. Florence is survived by her four children, John H. (Rosemary) Blowers of Marshall, Dan E (Jean) Blowers of Burnsville, Robert J. Blowers of Santa Cruz, CA and Timothy R. (Lois) Blowers of Tucson, AZ; her grandchildren, John J. Blowers, Christine Blowers, Alisa Peterson, Jay Blowers. Beth Brown and Michele Etherington; 13 great-grandchildren, her sisters, Irene Ziemer, Nancy (Dan) Mathews and Fern (Paul) Anderson; and other relatives. She is preceded in death by her parents, husband, John R. Blowers, her brother, Walter (Buddy) and his wife Lil Sorensen. In lieu of flowers, Florence requested decorating her memorial with a toy donation for Toys for Tots. Funeral arrangements are being taken care of by the Hamilton Funeral Home in Marshall. Condolences can be sent to www.hamiltonfh.com.

A Memorial service for Florence Blowers, age 93, of Marshall will be held at Christ Evangelical Lutheran Church of Marshall on Saturday, March 26th, 2011 at 2:00. She passed away on Monday, March 21, 2011 at the Minneota Manor. In Florence&#8217;s... View Obituary & Service Information

The family of Florence Kerstine Blowers created this Life Tributes page to make it easy to share your memories.

A Memorial service for Florence Blowers, age 93, of Marshall...

Send flowers to the Blowers family.