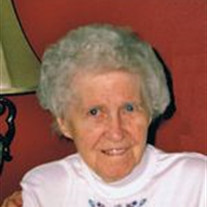 Services for Florence Graham will be at 11:00 AM Tuesday, July 10 at Wesley United Methodist Church in Marshall. Visitation will be Monday, July 9 from 4:00 -7:00 PM at the Hamilton Funeral Home with a prayer service at 6:00 and an Eastern Star service at 6:15. Florence Evelyn Larson was born on April 20, 1910 in Monroe Township to Carl Edward and Ida Amanda (Johnson) Larson. She attended school in Marshall and graduated in 1927. She attended Capitol Beauty School in Omaha, NE and graduated in June 1934. On September 12, 1936 she was united in marriage to Raymond Curtis Graham in Marshall. She was a beauty operator at the North’s Barber Shop and Vanity Box Salon, a retail clerk at Herman’s Dry Goods, Kay’s Shoe Store, and Sears. She later became the bookkeeper at Taylor’s Lumber Yard and then developed a Medicare and Health Insurance processing system at Lyon County Health Services. She retired in 1972 to travel with her husband. Florence and Ray enjoyed square dancing, playing cards, their cabin at Lake Amelia and traveling until Ray’s death in 1991. Florence was a member of Wesley United Methodist Church and a member of Lona Chapter 12 and was Worthy Matron in 1956/1957. Florence lived at Hill Street Place for many years and was a resident at Boulder Estates in 2006. She was an avid card player and known for her wit and wonderful sense of humor. Florence passed away peacefully on July 2, 2007 at the Trinity Care Center in Farmington, MN. She reached the age of 97 years 2 months and 12 days. She is survived by three children Yvonne Rae Ross of Bloomington, MN, Robert James Graham and wife Ilona of Albuquerque, NM. and Lynda Mae Paradis wife of Harlyn Paradis of Burnsville, MN; seven grandchildren, Jacqueline K. Ross and husband Scott Colwell of River Falls, WI., Joycelyn J. Rothe and husband Michael Rothe of San Diego, CA., John Graham of Dallas TX., Kevin Graham and wife Julie of Wauconda, Il, Nanci-Ann Linnenkohl and husband Paul of Franklin, WI., Michelle Carter and husband Jeff of Eagan, MN, Lance Paradis and wife Ann of Minneapolis, MN and eight great grandchildren.; Sisters-in law Ann Larson and Grace Graham and cousins Mildred Thomas and Esther Box, and many other nieces, nephews and friends. She was preceded in death by her parents, husband, and four brothers. Blessed be her memory.

Services for Florence Graham will be at 11:00 AM Tuesday, July 10 at Wesley United Methodist Church in Marshall. Visitation will be Monday, July 9 from 4:00 -7:00 PM at the Hamilton Funeral Home with a prayer service at 6:00 and an Eastern Star... View Obituary & Service Information

The family of Florence Graham created this Life Tributes page to make it easy to share your memories.

Services for Florence Graham will be at 11:00 AM Tuesday, July...

Send flowers to the Graham family.