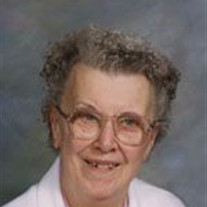 Marshall: Florence C. Larsen, age 95, of Marshall, passed away Saturday, July 17, 2010 at the Avera Morningside Heights Care Center. Funeral services will be 10:30 A.M. Wednesday, July 21, 2010 at St. Stephen Lutheran Church. Burial will be in the Danebod Lutheran Cemetery in Tyler. Visitation will be 4:00 P.M. to 8:00 P.M. with a 7:00 P.M. prayer service Tuesday at the Hamilton Funeral Home. Visitation will continue at the church on Wednesday, one hour prior to the service. Condolences may be sent to www.hamiltonfh.com. Florence Catherine was born to Fred and Mary (Frederickson) Jacobson on March 16, 1915 in Tyler, Minnesota. At the age of two she and her family moved to Huron, SD and attended school there for her first four years. They moved to Tracy where she attended the next four years of school. They then moved Tyler where she graduated from the Tyler High School in 1933. She worked for the county Sewing project under the WPA from 1934 to 1937 and then a Library project at the high school library from 1938 to 1939. In the summer of 1939 she began her job as a postal clerk at the Tyler Post Office and stayed there until 1946. On August 29, 1946, Florence was united in marriage to Gordon E. Larsen. To this union two children were born, namely, Kathy and Scott. They farmed near Arco from 1946 to 1974 when they moved to Marshall. Florence and Gordon moved into the Boulder Estates in the fall of 2001. Gordon passed away in 2002 and Florence continues to live there until she entered the Avera Morning side Heights Care Center in October of 2007. Florence passed away at the Avera Morningside Heights Care Center on Saturday, July 17. 2010. She had reached the age of 95 years, 4 months and 1 day. She is survived by her daughter and son-in-law, Kathy and Dan Sussner of Marshall; three grandchildren, Derek (Tessa), Randy (Michele) and Adam (special friend Kelly) Sussner; and five great grandchildren, Mason, Davis, Aiden, Jake and Devan Sussner. She was preceded in death by her parents; two brothers; husband, Gordon in 2002; and son, Scott in 1969. Florence enjoyed sewing, quilting and embroidering. Florence was a faithful member of St. Stephen Lutheran Church at the time of her death. Blessed be the memory of Florence C. Larsen.

The family of Florence C. Larsen created this Life Tributes page to make it easy to share your memories.

Send flowers to the Larsen family.