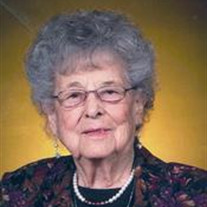 Marshall: Florence H. Radtke, age 98, of Marshall, passed away at the Avera Marshall Regional Medical Center on Thursday, June 2, 2011. Funeral services will be 11:00 A.M. Monday, June 13th at First Lutheran Church. Burial will be in the Johnsonville Cemetery. Visitation will be one hour prior to the service. The Hamilton Funeral Home is in charge of the arrangements. Florence Helen was born on May 11, 1913 in Clifton Township, Lyon County, Minnesota to Nels and Matie (Gartke) Petersen. She was baptized and confirmed in the Lutheran faith. She attended school at rural District 40 and the Milroy High School. On February 13, 1934, Florence was united in marriage to Harold R. Radtke. They farmed in the Johnsonville Township until they moved to Marshall in 1952. Florence worked for Swift and Company until she retired. The love of her life was her daughter and grandchildren, and doing things for them and with them. She also enjoyed cooking, sewing, going to the casino, 4 wheeling at Red Lake at the age of 85 and going to Minneapolis for the holidays. Harold passed away on January 12, 1988 and Florence joined him in death on Thursday, June 2, 2011. She had reached the age of 98 years and 21 days. She is survived by her daughter, Jean Beck of Bloomington, MN; granddaughter, Julie (and Joe) Watrud of Apple Valley; great grandchildren. Kelli and Jenny Watrud; step grand daughter, Katie Zaycheck; step great grand children, Bo, Mandy, Jake, Anna, Glenn, Brianna and Levi Beck; also many nieces, nephews, other relatives and friends. She was preceded death by her parents, husband, Harold and twelve siblings. Florence was a faithful member of the First Lutheran Church, American Legion Auxiliary and Eagles Club. Blessed Be Her Memory

The family of Florence Helen Radtke created this Life Tributes page to make it easy to share your memories.

Send flowers to the Radtke family.