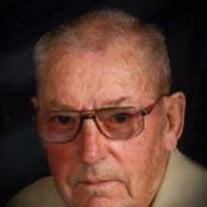 Marshall: Frank Allen, age 87, of Marshall, passed away at his residence on Friday, July 27, 2012. Funeral services will be 11:00 A.M. Tuesday, July 31, 2012 at the Wesley United Methodist Church. Visitation will be 4:00 P.M. to 8:00 P.M. with a 7:00 P.M. prayer service Monday at the Hamilton Funeral Home. Visitation will continue at the church on Tuesday, one hour prior to the service. Burial with military honors furnished by American Legion Post 113 will be in the Marshall Cemetery. Franklin Ray was born on November 2, 1924 in Pipestone, Minnesota to Ray M. and Edna M. (Barton) Allen. He was baptized and confirmed at the Wesley United Church. In 1943 he entered the United States Army and was a prisoner of war in Germany for six months. He was honorably discharged in 1945. On February 28, 1946, Frank was united in marriage at the Wesley United Methodist parsonage to Shirley Halstead. To this union four children were born; David, Philip, Nancy, and Steve. They farmed in Lincoln County, moving to a farm near Dawson and in 1951 they moved to Marshall where he hauled gas for Irv Peterson, Eden Gas, and BISBEE Plumbing and Heating. He retired in 2002. Frank’s enjoyments in life were family, coffee friends at Hardees, woodworking and puttering around. Frank passed away at his residence on Friday, July 27, 2012. He had reached the age of 87 years, 8 months and 25 days. He is survived by his wife, Shirley of Marshall; three children, Philip (Kim) Allen of Gilbert, Nancy (Richard) Pagel of Vesta and Steve (Darlene) Allen of Marshall; nine grandchildren; 10 great grandchildren; one step great granddaughter; one great great grandson; a brother, Marvin ( Sylvia) Allen of Mankato; daughter-in-law, Lil Allen of Marshall; two sister-in-laws, Violet Allen of Mankato and Leota Allen of Motley; also many nieces and nephews. He was preceded in death by his parents; son, David; four brothers, Gene, Ralph, Donald and John; and three sisters, Mary, Ardeth and Irma. Frank was a faithful member of the Wesley United Methodist Church. He also was a member of the Marshall American Legion Post, Marshall Veterans Of foreign Wars Post and Disabled American Veterans Post where he served as Quarter Master. Blessed be the memory of Frank Allen

The family of Frank Ray Allen created this Life Tributes page to make it easy to share your memories.

Marshall: Frank Allen, age 87, of Marshall, passed away at his...

Send flowers to the Allen family.