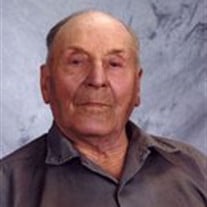 Frank V. Green, age 90, formerly of Lynd, passed away at the Minneota Manor on Wednesday, October 29, 2008. Memorial services are scheduled for 2:00 PM Wednesday, November 5, 2008 at Grace First Parish in Russell. Visitation will be held one hour prior to the service at the church. Burial will be in the Russell City Cemetery. Frank Vern Green was born to Hawley and Lydia (Wesland) Green on March 25, 1918 in Island Lake Township, Lyon County, Minnesota. He was baptized and confirmed into the Methodist faith in Russell. He went on to graduate in 1937 as the valedictorian from Lynd High School and then went on to Hamlin University where he studied chemical engineering. Due to his parent’s crops being hailed out, Frank had to quit school and return home to farm. Starting at the age of 8 he farmed for 78 years. The only time he left the farm was in 1946. He received terrible burns from a tractor fire, was hospitalized for 13 months and then went to California to recuperate for a year. While in high school enjoyed playing basketball and for 79 years attended many auctions, Frank passed away at the Minneota Manor on Wednesday, October 29, 2008. He had reached the age of 90 years, 8 months and 4 days. He is survived by a sister, Ruby Cichos of Tyler; six nephews, Bruce Prairie of Marshall, John Prairie of Willmar, Mike Prairie of Arco, Vernon Green of Overland Park, KS, Lowell Green of Logan, IA, and Dean Green of Mapleton, MN and a niece, Darlene McBride of Menomonie, WI. He was preceded in death by in death by his parents and two brothers, Virgil and Milo Green. Frank was a member of the Grace First Parish at the time of his death. Blessed be the memory of Frank Green.

Frank V. Green, age 90, formerly of Lynd, passed away at the Minneota Manor on Wednesday, October 29, 2008. Memorial services are scheduled for 2:00 PM Wednesday, November 5, 2008 at Grace First Parish in Russell. Visitation will be held one... View Obituary & Service Information

The family of Frank Vern Green created this Life Tributes page to make it easy to share your memories.

Send flowers to the Green family.