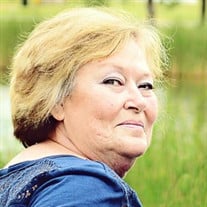 Frankie Kyner, age 65, of Marshall, Minnesota, died on Thursday, January 6, 2022, at the Avera McKennan Hospital in Sioux Falls, South Dakota. Funeral Services will be 11:00 a.m. Friday, January 14, 2022, at the Hamilton Funeral Home in Marshall, Minnesota. Visitation will be held just before the service Friday, from 9:30 a.m. until the time of services at 11:00 a.m., also at Hamilton Funeral Home. Frankie Ilene Waggoner was born on August 6, 1956, to parents Frank and Verble (King) Waggoner in Kansas City, Kansas. She grew up attending the Pentecostal Church and in 1974 graduated from the Wyndotte High School. Shortly thereafter Frankie was united in marriage to David Gregg and the couple had twin boys, Denton and Clinton. Frankie worked various places caring for homes and businesses in the Kansas City area as a housekeeper. She eventually started her own business with a friend that they called The Tidy Two. After 17 years together David died, and Frankie remained in the area. In 1994, Frankie was married to Billy Kyner in Missouri and the couple moved around Missouri while raising their daughter, Helena. It was during this time that Frankie cared for her own home and family as she devoted herself to being a mother and homemaker. She and Billy retired to Minnesota in 2014 to be closer to family, particularly grandchildren. Billy died in 2019 after 25 years together. Frankie regularly volunteered at her children’s schools in the PTA and enjoyed participating in several bowling leagues over the years. She was known for her artistic talents and made many arts and crafts, even selling her crocheted animals. Her joy was truly found in spending time with her family. Frankie Kyner passed away on Thursday, January 6, 2022, in Sioux Falls, South Dakota. She reached the age of 65 years and 5 months. Blessed be her memory. She is survived by her children, Denton (and Leslie) Gregg of Lynd, Helena Kyner (and Carl Durbano) of Cottonwood; 13 grandchildren, Jacob, Brandon, Jeremy, Nicolas, Jordan, Grayson, Nolan, Cameron, Jacob, Michael, Iris, Aurora, Grey Michelle; 3 great-grandchildren, Addeliyn, Teaghiyn, Adyn; sister, Delores Newkirk of Branson, MO; many nephews, nieces, other relatives and friends. Frankie is preceded in death by her parents, Frank and Verble Waggoner; husbands, David Gregg, Billy Kyner; son, Clinton Gregg; granddaughter, Meaghyn Ensor; and sisters, Debbie Waggoner and Linda Metcalf.

The family of Frankie Ilene Kyner created this Life Tributes page to make it easy to share your memories.

Send flowers to the Kyner family.